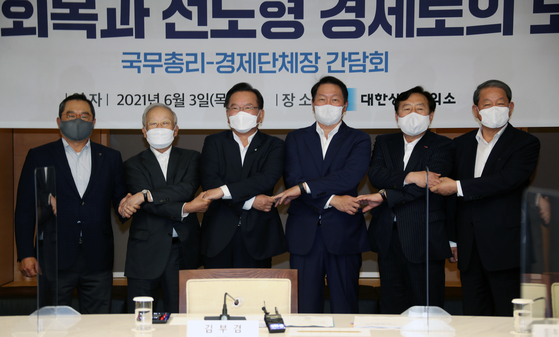 Prime Minister Kim Boo-kyum, third from left, poses with the heads of major business associations on Thursday at the office of Korea Chamber of Commerce and Industry. [YONHAP]


Korea’s business lobbying groups continued to push for the pardon of Samsung Electronics Vice Chairman Lee Jae-yong on Thursday, a day after the issue was brought up during a meeting between President Moon Jae-in and the heads of the country’s top four conglomerates.

The gathering came as the Moon government strikes a more optimistic tone on the possibility of granting clemency to the jailed executive, who is serving a two-and-a-half-year prison term for bribing former President Park Geun-hye.

The business representatives underlined the role that Lee could play at a time when advanced economies are competing for technical supremacy in semiconductors in the face of a widening chip shortage.

“If we look at what’s happening around the world, it appears that the prestigious standing that Korea has claimed could be reversed,” said Sohn during the meeting.

Sohn spearheaded an effort to send a letter calling for Lee's pardon in April, although the presidential office, at the time, flatly turned down the request, saying that it has no plan to consider the option.

The stance started changing in May, when the president said that the government will decide after consulting public opinion and similar cases in the past.

In the latest meeting on Wednesday, Moon said that he fully understands the difficulties [Korean businesses face] and acknowledges the growing public call for Lee to be pardoned.

It remains unclear how the prime minister responded to Sohn’s comment, since the event was a closed-door meeting.

Kim maintained an amicable tone in an opening speech, saying that “[the government] will follow through with the direction if the suggestion benefits the public.”

Chey Tae-won, who also attended the Wednesday meeting with the president, raised the need for closer cooperation between the government and the private sector in navigating the post-pandemic era, according to the KCCI.

The business circle also pushed for increased tax credits for companies pushing for carbon neutrality and the revision of a bill on workplace accidents that passed in January.

The bill imposes at least a one-year prison sentence or a fine of less than 1 billion won ($922,000) on those at the helm of companies involved in industrial accidents caused by lax safety management.

The business associations have said that the proposal still places an undue burden on CEOs, given that existing laws already punish the corporations for negligence.

Still, civic groups and labor unions support the bill, claiming that the stronger punishment could translate into higher vigilance for safety on industrial sites.