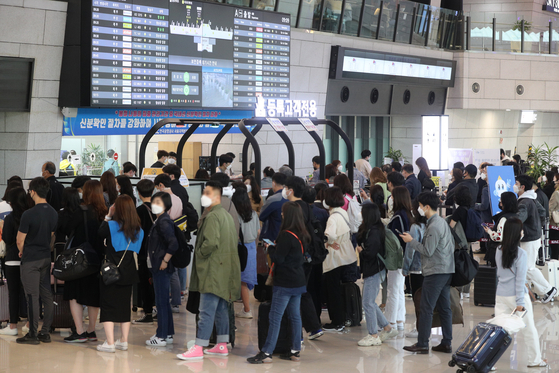 Gimpo Airport in Gangseo District of, western Seoul, is filled with travelers on Friday, as the country reports 797 new daily infections from the previous day. The number is the highest in 106 days. [NEWS1]

According to the Korea Disease Control and Prevention Agency (KDCA), 797 new cases, including 758 local infections, were reported as of Thursday midnight, raising the total caseload to 117,458.

Over the past week, the number of new daily cases steadily grew, staying over the 700 mark for three consecutive days. The KDCA said 731 new cases were reported on Wednesday and 735 on Thursday.

Untraceable cases accounted for 29 percent of all cases reported in the past two weeks, the highest ever, according to the KDCA.

Three more deaths were reported overnight, raising the total to 1,811. The fatality rate is 1.54 percent.

Meanwhile, the military said Friday that a cluster infection involving at least 32 sailors on a Navy ship was reported. It is the first time that an infection was confirmed at a Navy ship.

According to the Ministry of National Defense and the Navy, a Navy ship, carrying 84 sailors, left Jinhae Base of South Gyeongsang on Tuesday. On Wednesday, one of the Navy officers on the ship was informed that his child had been in close contact with an infected person at a day care center. He was quarantined inside the ship until it arrived at the Pyeongtaek Naval Base in Gyeonggi on Thursday.

The sailor was transported to a nearby hospital on Thursday and later tested positive.

Other sailors remained on the ship for testing. According to the ministry, 31 more were tested positive as of 10 a.m. on Friday.

The Navy said it will elevate the social distancing status to Level 2.5 at all naval vessels and bases for the next two weeks. Under the new measure, Navy members were banned from leaving the bases.

Last week, the government decided to keep the current social distancing levels through May 2, although it did strengthen restrictions on certain types of night entertainment establishments.