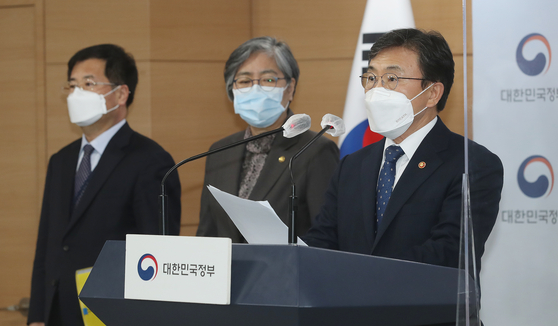 Health Minister Kwon Deok-cheol speaks during an emergency briefing on Covid-19 vaccines at the government complex in Seoul on Saturday. [NEWS 1]


Health authorities announced Saturday that Korea signed a deal with Pfizer for an additional 40 million vaccine doses, or for 20 million people, amid growing public concerns about a vaccine shortage.

This brings the total amount of vaccines Korea has procured to 192 million doses, or for 99 million people – which is enough to inoculate its entire population of 52 million almost twice over.

Health authorities, however, did not disclose the schedule for the deliveries of the 40 million doses owing to a confidential agreement with Pfizer.

"Through the additional purchase contract, we have not only secured sufficient amounts to achieve herd immunity by November, but it has also provided a foundation to hasten the timeline,” said Kwon during an emergency briefing on Saturday.

“We will be able to prepare for global uncertainties in vaccine supply, as well as for additional demands that may occur in the future such as a third inoculation [booster shot] against mutant viruses and expansion of the age of inoculation targets under the age of 18,” added Kwon.

Since the first arrival of Pfizer batches on March 24, 250,000 doses have been delivered to Korea regularly every Wednesday. 1.75 million and 3.25 million doses are to be delivered each in May and in June.


“59 million doses [of Pfizer vaccines for 29.5 million people] will be delivered sequentially from July,” a health official said.


Following the announcement, the main opposition People Power Party (PPP) questioned whether the new contract would lead to herd immunity by November.

"We have heard countless ambiguous words about signing or securing additional vaccine supplies,” Yun Hee-suk, spokesperson for PPP said. “[The government] should specify a date when the supplies will be delivered."

Last December, President Moon Jae-in declared the government would import 40 million doses of vaccines from another American pharmaceutical company, Moderna, in the second quarter after personally holding a videoconference with Moderna’s CEO. Last week, the delivery date was delayed to the second half of the year.

Korea signed a contract with Janssen for doses for 6 million people and with Novavax for 20 million people, but even initial delivery details have not been confirmed. 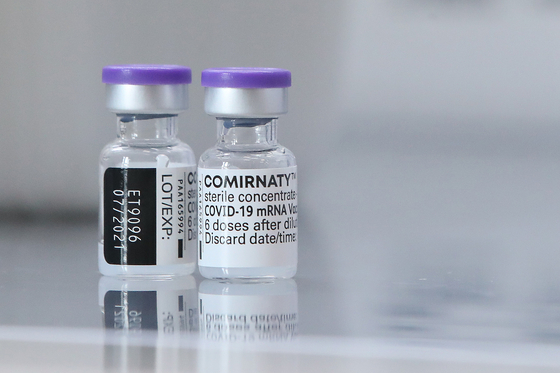 
Some analysts point out that vaccines scheduled to be imported in the second half of the year cannot be counted on as competition for Covid-19 jabs heats up around the globe.

Demands for mRNA-based Pfizer and Moderna vaccines are expected to increase around the world after cases of rare blood clots have been reported from the virus vector-based vaccines made by AstraZeneca and Janssen.

Earlier, the European Commission announced it is in negotiations to receive 1.8 billion Pfizer doses from this year to 2023. Canada has reached an agreement with Pfizer for 35 million booster shots next year and 30 million in 2023, with access to up to 120 million more if all its options are exercised.

“The contracts with other countries will not have an impact on the supplies to Korea,” said Kwon. “Pfizer vaccines are coming in regularly according to the supply schedule.”

A key official from the Blue House said, "We haven't received many Pfizer vaccines yet, but it is reliable in terms of supply as it is coming in without delay according to the plan.”

On Sunday, a 77-year-old apartment security guard was reported to have been found dead after receiving a Pfizer shot. Police will ask the National Institute of Scientific Investigation to conduct an autopsy to investigate the cause of death.

Daily infections spiked to nearly 800 last week as clusters continued to spread nationwide, including in the entertainment industry.

Retired Korean LPGA legend Pak Se-ri tested positive for the coronavirus Saturday after having come into contact with musical actor Son Jun-ho during an online broadcast on Wednesday. Son was confirmed positive on Friday.

Another cluster of infections was reported at an Air Force unit in the southern city of Sacheon, with a total of eight people, including Air Force officers and public servants, tested positive for the coronavirus over the weekend.

As the number of daily Covid-19 cases increases and concerns grow about a fourth wave of the pandemic, Korea set this week to strictly apply social distancing measures and to inoculate an average of 140,000 to 150,000 people daily. 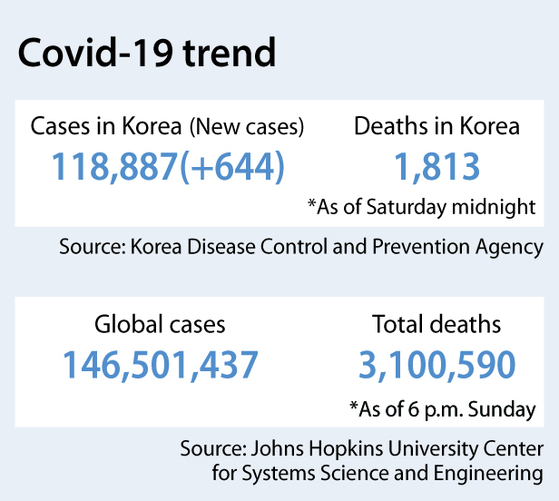 Starting Monday, Korea will begin inoculating AstraZeneca vaccines to a 173,000 essential workers such as police officers, firefighters and coast guards. People under 30 are still excluded due to concerns over rare cases of blood clots.