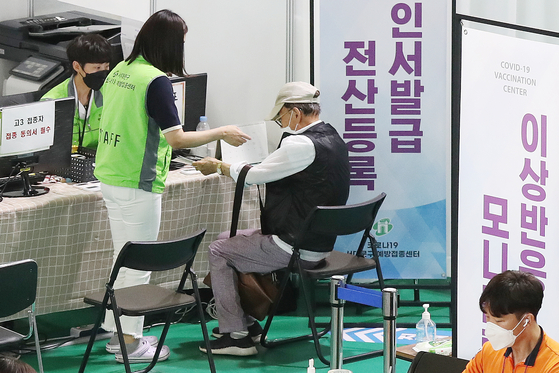 A senior citizen waits for any possible adverse reactions after receiving a vaccine at a Covid-19 vaccination center in Seodaemun District, western Seoul, on Monday. [NEWS1]


A rise in prices of Pfizer and Moderna's Covid-19 vaccines will likely affect Korea's supply contracts for next year, health officials said Monday.

The country is currently planning to procure 50 million vaccine doses next year.

“The vaccine supply amount announced this year will be supplied based on the previous contract price and won’t be affected by the rise [in prices],” Sohn Young-rae, a senior epidemiological strategist at the government’s Central Disaster Management Headquarters, told reporters Monday.

According to a report in the Financial Times on Sunday, Pfizer and Moderna raised the prices of their mRNA-based jabs in their latest European Union supply contracts by more than 25 percent and 10 percent, respectively.

The deal likely comes as Europe struggled with supply disruptions and concerns about side effects from rival vaccines by Oxford-AstraZeneca and Johnson & Johnson.

While the price increase may affect talks on supply contracts for next year, Korea is still in the early stages of negotiations, so it is not easy to tell what effect it will actually have, Sohn explained.


The government is currently pushing for contracts with pharmaceutical companies to procure 50 million doses for next year's inoculation program and to supply booster shots, or an extra dose of a vaccine after the initial series of injections.

“We have secured a prepayment budget to receive about 50 million doses for next year in the last supplementary budget,” Jeong Eun-kyeong, commissioner of the Korea Disease Control and Prevention Agency (KDCA), said during Monday’s briefing.

“We will push for the contract through negotiations with pharmaceutical companies in the second half of the year,” Jeong added. She didn’t specify the exact amount, type of vaccines or delivery dates.

Amid the pandemic and the unstable supply worldwide, health authorities stressed that it is imperative that the country secure its own domestically-produced Covid-19 vaccines in the mid to long run.

“There are only a handful of pharmaceutical companies that produce vaccines worldwide, while the countries that want to buy them are all over the world, so buyers continue to fall comparatively disadvantageous of suppliers,” he said.

President Moon Jae-in said Monday the country aims to give at least one dose of a Covid-19 vaccine to 36 million people, or 70 percent of the population, by the Chuseok harvest holidays which start on Sept. 18 — earlier than the previous plan shooting for the end of September.

“By tomorrow, more than 20 million people will have received at least one dose of a vaccine,” Moon said during a meeting with senior Blue House secretaries.

“We are planning to complete the first round of inoculation for 36 million people by the end of September,” the president added. “We're aiming to advance [the completion date] and achieve the goal before the Chuseok holidays."

Despite such plans, the country has been struggling in its fight against the coronavirus and with consistent providing vaccinations.

The country reported 1,219 new Covid-19 cases on Monday, with its accumulated caseload surpassing 200,000.

One more death has been reported, bringing the death toll to 2,099.

The KDCA announced Monday that 96.7 percent of Covid-19 infections in May to June were of unvaccinated people.

Among the fatalities or patients in critical condition, unvaccinated people accounted for 93.5 percent of the total observed cases.

“We are asking everyone to actively participate in the vaccination campaign as vaccines can prevent serious illness and death even if you do get infected with the coronavirus,” KDCA commissioner Jeong said.

Starting Monday, vaccine reservations once again became available for people over 60 who haven’t been vaccinated yet.

People over the age of 74 can get vaccines by booking directly at a vaccination center at any time.

From Tuesday, reservations will expand to include around 2 million people in the broad age group between 18 to 49 who need the jabs first.

This priority group includes employees of essential services such as public transportation drivers, delivery workers and street cleaners; people who work in close contact with children such as hagwon (cram school) teachers; employees of high-risk facilities such as restaurants, noraebang (singing rooms), PC bang (internet cafes); as well as people who may not have been well informed about the vaccination system, such as disabled people, foreign workers and international students.

Anyone who misses their chance to book a vaccine can try again from 8 p.m. Thursday to 6 p.m. Friday.

Those who wish to get their shot can make reservations through the national vaccine registration website (ncvr.kdca.go.kr). They can also contact the KDCA's 1339 hotline or their local government’s call center.