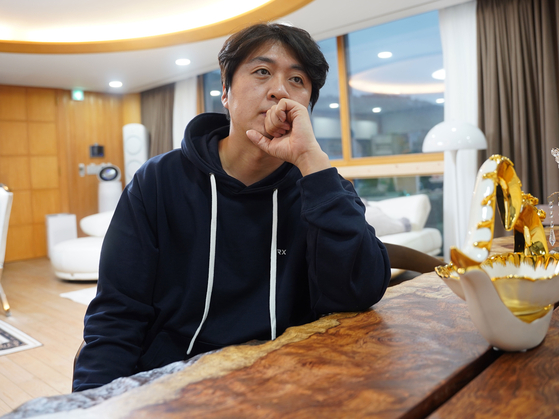 
In the age of growth — of branding and celebrity and impressions and content creation — it often becomes all too easy to forget about the heart of the machine: Why it all started, why it's still a thing.

Esports only exists because neck-and-neck competition at the highest level can be incredibly thrilling to watch, because the best games provide the space in and methods by which skilled players can defy expectations to express themselves, and in turn inspire viewers.

The 2021 League of Legends Champions Korea Spring Split was a good reminder of that fundamental truth. This regular season was unusually exciting — not because the league transitioned to a franchise system and had its visual assets revamped by an international brand and design agency, but because so many underdog teams stepped up and proved themselves legitimately capable of felling the best.

At the center of this split's storylines was DRX, the mostly-rookie squad who had been written off completely at the start of the year. The vast majority of preseason projections had placed them around eighth or ninth. The team outperformed all expectations, however, by consistently punching far above their weight and even qualifying for the playoffs.

While their time in the postseason was brief — DRX were knocked out 1-3 in the first round at the hands of T1 — fans and experts alike were quick to praise them for making it there to begin with. 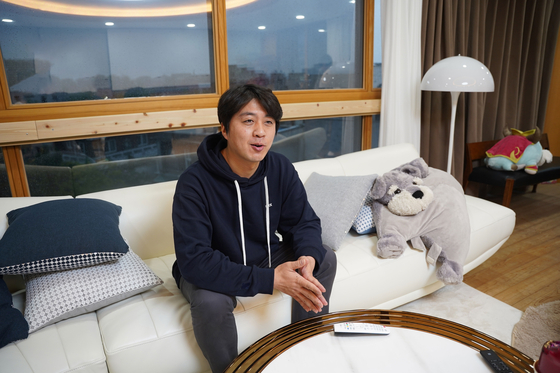 
"I'm really proud of the players for achieving what they have this season, even though [I wish] we could have [gone further] in the playoffs," said cCarter, reflecting on the team's spring split. "Our relative lack of experience clearly showed in our match against T1, [but] I think what we learned from that series will serve us well come summer."

The 37-year-old GM added that the team was "built with the entire year in mind, not only spring", and had high hopes for his players' development, particularly in the psychological department.

Asked whether there were any individuals who deserved particular mention, cCarter stressed that their fifth-place finish was a team effort. "I don't think I could single out one or a few for special praise," he said. "Each and every one of our players stepped up for the team at different crucial moments during the season. I know how hard our coaches worked, too."

That being said, cCarter did acknowledge the central role that ace jungler Hong "Pyosik" Chang-hyeon, the sole holdover from the 2020 DRX squad, had taken on for his new teammates. "Many of our rookie players very often looked to Pyosik for [guidance], and I think Pyosik made [great use] of his experience to take the lead and help the team move together as one," he said.

It was revealed that various complaints regarding beds, water purifiers, and air purifiers at the team house had not been addressed in a timely manner, and the organization's production of "boys' love"-themed content for Chinese social media was also harshly criticized for misrepresenting the players against their will.

The very next month, head coach Kim "cvMax" Dae-ho was suspended from participating in team operations for five months.

The ruling was based on a behind-closed-doors investigation requested by Riot Games Korea and conducted by an independent fairness committee established by the Korea e-Sports Association. The committee concluded that cvMax had used verbal and physical violence while coaching certain players on Griffin, his previous employer, and issued a temporary ban.

In the space of only a few weeks, DRX had lost four-fifths of their fan-favorite roster and suddenly needed to look for a stopgap head coach as well. Fans were furious and called for Choi Sang-in, who had been acting as both CEO and general manager, to step down. Choi apologized, said he would retreat to a backstage role, and promised that someone better qualified for the GM position had been signed.

While those words were kept — few in Korean esports are as experienced as cCarter, who has won three League of Legends World Championships as the head coach of SK Telecom T1 — it was highly doubtful if DRX could retain any of their fans after having collapsed so spectacularly.

Yet once the season kicked off, DRX's new roster soon gained a reputation for their stellar teamwork and never-give-up attitude. Old fans started tuning in again to watch Pyosik lead a ragtag squad; new fans gathered because they appreciated the underdogs' gritty gameplay. Word of mouth spread quickly. 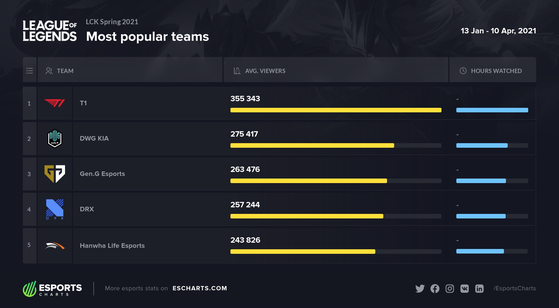 DRX drew in the fourth-most average viewers across all non-Chinese platforms over the 2021 LCK Spring Split, according to Kiev-based analytics provider Esports Charts. [ESPORTS CHARTS]


The new DRX's popularity is no illusion: According to Kiev-based analytics provider Esports Charts, DRX pulled in the fourth-highest average viewers across all non-Chinese platforms over the 2021 LCK Spring Split.

"Honestly, [we] had not expected to receive this much support. It's all thanks to the players," cCarter said. "I think many fans really appreciated how much heart our players put into match preparation, and how much hunger showed in our games."

While cCarter had no intention of underplaying the satisfaction in watching displays of sheer dominance — "[stomps] are really fun to watch, too" — he felt that many fans were always on the lookout for the particular tingle that only upsets and comebacks can bring.

"One community post that really stuck with me went: 'I'm not a DRX fan, but I tune in for them because their games are entertaining.' I think there were many such viewers, and [some] eventually started to care about us as supporters because we just kept on playing our hearts out. I think many fans felt there was a certain 'romance' to our games," he said.

Organizational philosophy, according to cCarter, may be part of the reason for their surprising success. Although he was hesitant to attribute too much causality or meaning to a mere corporate slogan, he did feel that DRX's motto "Enjoy Challenge" had some influence on the team.

"[Some of] our players have been with the organization as trainees for a really long time, and have always been exposed to the motto," he said. "Our coaching staff also strives to give feedback in a [positive way], by asking open questions instead of simply discouraging certain plays. We try not to stifle our players."

A nod was also given to the team's media department for learning from last year's disastrous mistakes and turning things around by "talking more with the players, as well as listening to the fans more."

Regarding his own performance as GM, the former T1 legend was more critical, as he felt he could have done more for the team this spring, had he been more used to the role. Nevertheless, cCarter was happy to have found fresh joy and motivation in laying the groundwork for a new legacy, as opposed to working to maintain an established one.

"The year isn't over yet," he said. "I'm enjoying the challenge."