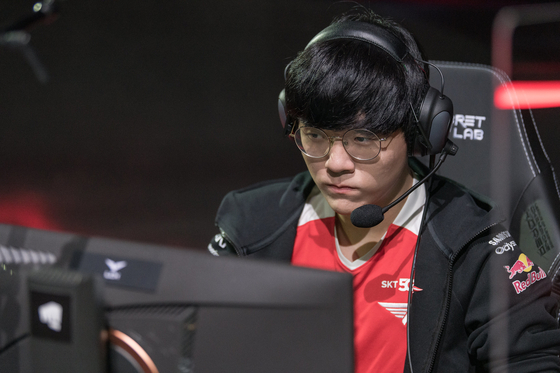 
T1 took an encouraging 2-0 victory over DRX last Sunday, bringing an end to their recent string of losses in League of Legends Champions Korea while extending DRX's winless streak to six.

After the match, fan-favorite AD carry Park "Teddy" Jin-sung spoke to the Korea JoongAng Daily about the team's recent communication issues, how both T1 and DRX ended up playing two consecutive games with the exact same drafts, and his thoughts on the current meta.

Following are edited excerpts from the video interview, the full version of which can be found on the Korea JoongAng Daily YouTube channel.


Q. T1 started off the split well, but have struggled recently. Have the team internally discussed why this happened?

A. We had some communication issues and we've been working on it.


Q. Early on in the split, there was a lot of buzz around T1's moment where Faker said "we moved as one." But since then, we've seen the team look rather uncoordinated on several occasions. Even if you can't go into the details, could we hear a bit about what kinds of communication issues are going on?

A. In matches, we need to maintain communication and keep positive words flowing, but sometimes we were playing without speaking much, so there was some feedback around that.


Q. T1 used to be renowned for dominant late game macro, but this summer, that hasn't been displayed as often. Does this also stem from the issues you've mentioned?

A. In truth, everyone has improved recently. I'm not saying they were bad before, but now everyone has a grasp on what the ideal macro is, and has tightened up their game. It might look like we've gotten worse, but it's more that our competitors have really stepped up. So we're working hard to get better as well.


Q. You used to be called the "Human Nexus" for dying so rarely. But this season, you've been dying a bit more often than before, it seems. What are your thoughts on this?

A. I think some of it has to do with haste. Looking at my deaths, it's always when I'm being too hasty, or trying too much to match what the team's trying to do. I think I should start focusing on my own positioning and avoid being dragged out too much by the team.


Q. So some of it is due to abandoning the mindset that you should always stay alive until the end and carry?

A. Adapting my play to what my teammates want to do has occasionally led to me overlooking some things. I'm working to focus on my individual positioning again, as I used to do.


Q. On the broadcast post-match interview, you mentioned that Jhin is a decent pick if the top half of the map does well. A lot of focus is put on the bot lane carrying these days. Do you think Jhin is a solid pick despite that meta trend?

A. Different people will have different thoughts on the matter, but from an ADC perspective, right now, too many champions can just jump on top of you. So I think the meta's more about how well the top half can hound enemy carries, rather than bottom lane carrying.


Q. Your teammate Gumayusi is rather well-known for his strong dislike of utility-centric marksmen, which he calls "fake ADCs". What are your thoughts on the "fake ADC" discourse?

A. Well, it depends on how one plays them, really. In the early game, Jhin is a "fake ADC", but as the game goes on, he grows really strong, right? He can take up forward positioning and dish out a lot of damage and secure kills. In Senna's case, with Divine Sunderer, she feels like a support, like she's just here for utility, but with Kraken Slayer, she can play a lot more aggressively.

I feel it depends on item builds, and also the player's personal interpretation. I mean, you could argue Ashe is a fake ADC as well, right, if she's just shooting Hawks and Crystal Arrows. So I think it really depends on play.