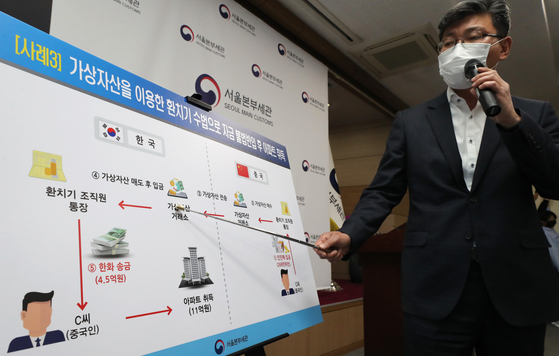 A Korea Customs Service's Seoul office official on Tuesday explaining how cryptocurrency was used by a Chinese in buying an apartment in 2018. [YONHAP]


Foreign investors, including investors from China and the United States, have been accused of using cryptocurrencies to evade reporting rules in the purchase of properties.

The Seoul office of the Korea Customs Service on Tuesday said it has found 61 foreigners who purchased 55 apartments in Seoul over the past two years using means that violated the Foreign Exchange Transaction Act. They were valued at 84 billion won ($75.6 million).

In most cases, the investor transferred the funds through illegal channels to circumvent the regulations.

When using foreign capital to purchase property, buyers have to report the transaction to a commercial bank or to the central bank.

Those failing to do so can be jailed for up to a year and be fined 100 million won, if the purchase was more than 1 billion won.

Among the 61, 17 bought 16 apartments valued at 17.6 billion won circumventing foreign exchange reporting requirements. The other 44 were found to have failed to report their property purchases.

In one case, a Chinese investor in 2018 bought an apartment in Seoul for 1.1 billion won. The money that was used partially came from cryptocurrency that was purchased in China through a Chinese organization that specializes in illegal foreign exchange transactions.

In another case, a Chinese investor exported 2-billion-won worth of masks and protection suits amid the rise of Covid-19 in February 2020. The Chinese businessman reported the value of the exports to the Korean customs office at 300 million won.

The profits were used to buy an apartment in Seoul for 750 million won under the name of his wife, who has no separate income.

The biggest apartment purchases were made in Gangnam District.

The investigation was conducted with the Ministry of Land, Infrastructure and Transport. They analyzed foreign exchange movements and financial accounts.