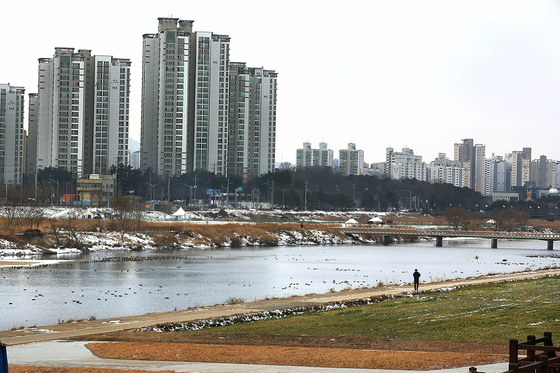 
Gap investment is booming in Korea, with investors mainly targeting small properties located outside restricted areas and with a government-assessed value under 100 million won ($88,500).

Gap investing is possible when the purchase price and the jeonse long-term deposit price are about the same, meaning that the buyer can make the investment with someone else’s money.

The investor has to return the deposit when the tenant moves out, but if the price rises, they can book a big profit with relatively little capital.

The most popular area for gap investment is Pyeongtaek, Gyeonggi.

According to data from Asil, a real estate information provider, a total of 7,426 property transactions were made in Pyeongtaek during January-to-June period. Of them, 9.3 percent were gap investments. That is the most for any area. 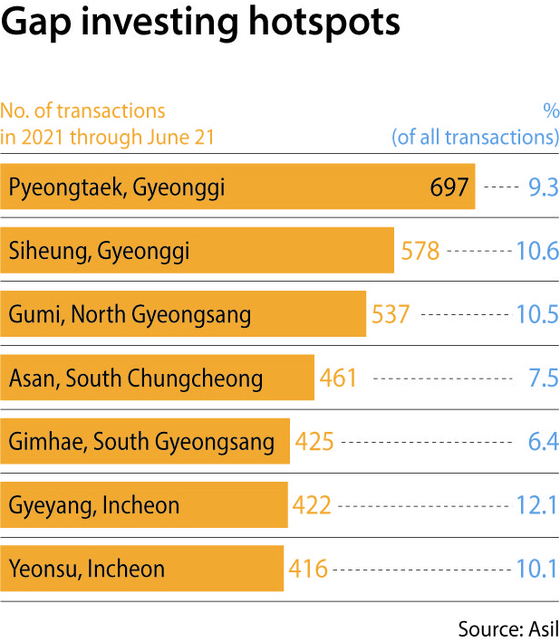 The apartment complex is home to 1,188 households.

About a year ago, the same apartments traded at 90 million won to 120 million won. The property price has actually been rising, which leads people to go for gap investments in the hope of achieving gains in a short period of time.

According to the Korea Real Estate Board, Pyeongtaek apartment prices were up 0.88 percent on the week to June 21 on week. That was the fourth sharpest increase among 176 cities, counties and districts across the country for which the government agency collects data.

Pyeongtaek apartment prices are up 11.27 percent this year through June 21. The rate of increase was only at 3.51 percent during the same period a year earlier.

Investors seeking to avoid punitive taxes are especially interested in this strategy.

According to the government's 22nd real estate measures in July last year, the acquisition tax for the purchase of a property in a restricted area was increased for people owning more than one property.

But if people purchase an apartment with an assessed value less than 100 million won, they are only obliged to pay a 1.1 percent acquisition tax. People who wish to continue real estate investment but without paying heavy taxes are turning their eyes to small and low-priced apartments outside of the restricted areas.

Asan in South Chungcheong was also a popular choice.

A total of 289 flats in the Baebang Samjeong Green Core apartment complex in Asan have been traded so far this year, according to data from Ministry of Land, Infrastructure and Transport. Some 17.6 percent of them were likely gap investments, according to Asil.

Among all apartment transactions made in Asan so far this year, 7.5 percent were gap investments.

A total of 261 apartments in the Chowon Green Town apartment complex in Cheonan, South Chungcheong, were traded so far this year. The average price was 66.64 million won for a 39.27-square-meter flat. The apartment complex is very popular for gap investors as the jeonse price is some 86 percent of the sale price, according to KB Kookmin Bank’s real estate department.

In 2020’s fourth quarter, only 6.6 percent were purchased by people who do not live in Wanju County.

According to data by the Korea Real Estate Board, some 27.3 percent of apartment transactions in the first quarter of the year were made by people who live outside the area of purchase. That’s highest quarterly figure since 2006 when the statistics agency started collecting related data.

Some experts warn about the gap investing.

“People can lose money if they make investments only thinking about short-term gains without having enough understanding of regional economy,” said Seo Jin-hyung, head of the Korea Real Estate Society.