Webtoon platforms become the host for the battle of the sexes

Webtoon platforms become the host for the battle of the sexes 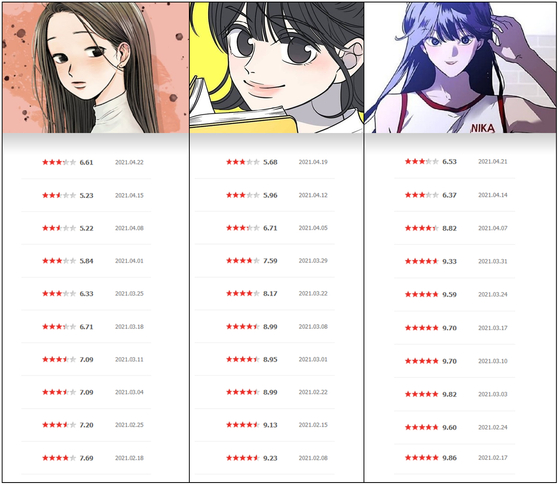 Three webtoons on Naver Webtoon (from left) ″The History of Seong Gyeong,″ ″Romance 101″ and ″The Girl Downstairs″ have recently been targeted by male-centered websites who leave negative comments and ratings. [SCREEN CAPTURE, JEON TAE-GYU]

The online realm is often the battleground for conflict between the genders and now an unlikely content platform has become host to such sparring matches — webtoons.

Several works on Naver Webtoon have recently been plagued with comments irrelevant to the works and seen their ratings plummet after being targeted by online communities accusing them of misandry, or the dislike of, contempt for, or ingrained prejudice against men.

It began on April 15 when a scene from webtoon “The History of Seong Gyeong” (translated), written by Choi Kyeong-min and illustrated by Youngmo, was targeted by the Local Baseball Gallery, a subsection within online community DC Inside, for a chonggong, or a full-on attack. The post encouraged the community users to take over the comment section and rating of the webtoon as soon as the latest episode was published. The post was read by more than 40,000 people and garnered 1,400 likes.

The attack on “The History of Seong Gyeong” was sparked by a scene in the 31st episode, which was published on April 1. “The History of Seong Gyeong” revolves around university student Seong Gyeong, whose good looks and shy manners make her a victim of unsolicited affection and scandalous rumors among her peers. In the problematic episode, students at Gyeong’s university gossip about how a female student supposedly had a lesbian relationship while she was in high school and subsequently took her own life after her university boyfriend spread pictures exposing her past online. 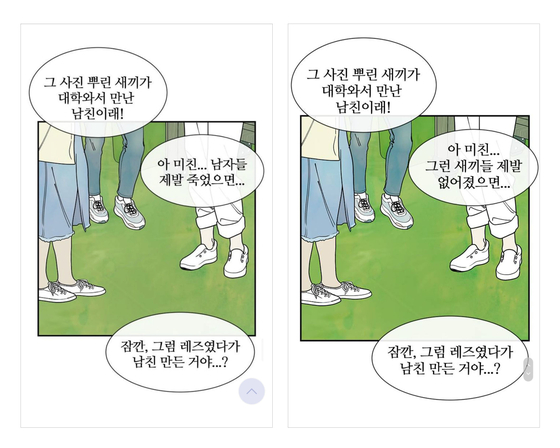 A scene from "The History of Seong Gyeong" showed an anonymous student saying, "I wish men would die" (left) but was changed to "I wish they would disappear" after harsh criticism commenters who claimed the scene was misandrist. [SCREEN CAPTURE] 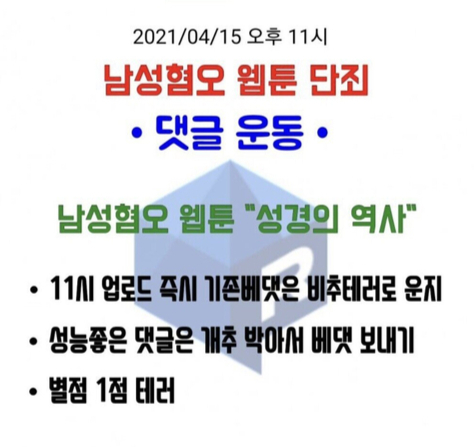 A notice of full-on attack referred to as ″chonggong″ on ″The History of Seong Gyeong″ on DC Inside. [SCREEN CAPTURE]


One female student — intentionally depicted as an anonymous character to highlight how rumors are spread by word of mouth — upon hearing the news says, “It’s crazy. I wish men would die.” DC users, who are known to be mainly male, took this line and argued that this was commonly said by Korea’s radical feminists and therefore the webtoonist must be a misandrist (the opposite of a misogynist.) Comments on the DC post expressed rage, saying, “It’s unfair to want all men to die just because they’re angry at a specific person.”

DC gathered its troops, assembled at 11 p.m. and initiated a full-on attack on April 15 night as warned. The attack included lowering the rating, uploading comments and clicking like on each other’s comments to push them up the comments section. Comments were mostly focused on calling the webtoonist out and demanding that he apologize, but many of them included misogynistic content irrelevant to the work. Some even made fun of President Moon Jae-in, who is often accused of being a feminist by his adversaries, which they deem to be a negative thing.

Over the weekend, the ratings for recent episodes of “The History of Seong Gyeong” plummeted to an average of three out of 10. It slightly recovered to 5.84 on the 31st episode and 6.61 on the latest 34th episode, but the backlash had an effect and the problematic line was changed to “It’s crazy. I wish they would disappear.” The overall rating for the webtoon is now 7.09.

Several webtoons have been targeted by commenters. [SCREEN CAPTURE]


Other male-centered communities such as FM Korea, which used to be a football community, Ruliweb and Ilgan Best, better known by its abbreviation Ilbe, joined the witch-hunt. They shared a list of webtoons that they believe include misandrist expressions, including “The History of Seong Gyeong,” Morangji’s “Odd Girl Out” and “In-law Fantasy” (translated) by Jindol and Hidi. They shared specific “coordinates,” or the time and place of attack, and asked others to “cover me” while they “reeducate” and “punish.”

In the 98th episode of “Romance 101,” Doeun asks Hanam whether he still likes her and Hanam becomes nervous and anxiously plays with his hands thinking of a response.

According to some of the commenters, the way that Hanam holds his two fingers makes an incomplete “O” sign which resembles the logo of Megalia, an online radical feminist community that was dismantled in 2017.

In “The Girl Downstairs,” three scenes were criticized: The two-finger sign, a line when the main character Joon is shushed by female characters who tell him “A boy shouldn’t dare to interrupt when girls are talking. Go and do the dishes” and the usage of the term heobeo heobeo.fPUBLIUS

Heobeo heobeo a slang term in Korean to describe a person eating something quickly or doing something in a hurry. It is said to have either come from the English term “hubba hubba” or the Jeolla regional adjective that means “very.” The term heobeo heobeo itself has been used since the 2000s, but has recently faced backlash because some deem it misandrist because of the frequency of its usage by female internet users.

In March, Kakao released a new set of emojis for its Kakao Talk chat app that included one character saying heobeo heobeo. Kakao took the item down from the market after severe complaints from male users. Multiple YouTubers who used the term in their content had to apologize even if the video was from years ago. 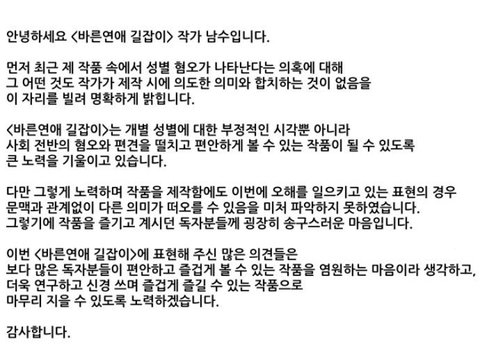 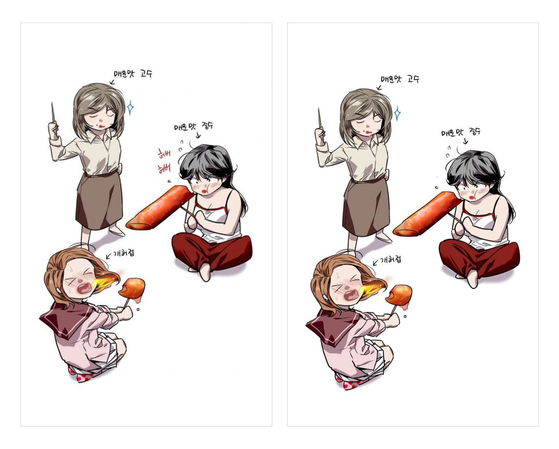 A scene from "The Girl Downstairs" was changed to remove the term "heobeo heobeo." [SCREEN CAPTURE]


Following the recent attacks, webtoonists of “Romance 101” and “The Girl Downstairs” issued apologies. Namsoo of “Romance 101” wrote in a letter, “I must make it clear that none of the things that my work has been accused of are in line with my intentions [...] I was not aware that a certain form of expression could be interpreted out of its original context to conjure up other meanings. I am very sorry to the readers who were enjoying the work.” Min of “The Girl Downstairs” also changed the scenes in question and said they “may have been misleading.” Namsoo took a week of leave this week and skipped publishING an episode.

"The attackers may say they are trying to fix wrongful content, but in their hearts, they just enjoy the destructive action and stampeding on others," said culture critic Kim Heon-shik. "If they had really wanted to bring about change, they wouldn't have just had a tantrum, and instead, would have opened up a conversation. This is more like a display of power and they gain both the satisfaction from the violence as well as the sense of moral superiority."

According to insiders from the webtoon industry, such attacks on individual work burden the webtoonists to a grave degree. They become greatly insecure and can even suffer from panic attacks or depression, especially if the criticisms are aimed at trivial details that the author did not intend or use as the main message.

“I saw a webtoonist whose work was popular among women but very unpopular among men,” said an insider who wished to remain anonymous. “The webtoonist suffered from vicious comments throughout the work and even received threatening messages on social media. It took the webtoonist months to treat their depression and three years to eventually come back with another work.” 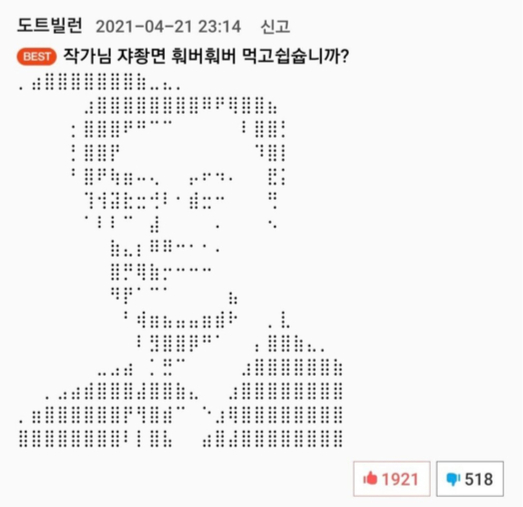 A comment on ″The Girl Downstairs″ that received almost 2,000 but has been deleted now because it was irrelevant to the webtoon features President Moon Jae-in's face. Naver automatically deletes messages that are irrelevant to the work or pose controversial content. [SCREEN CAPTURE]


Although some taking part in the online attacks claim that “Naver is deleting the comments,” the portal has kept a consistent policy, even when the works it publishes come under fire, that it does not interfere with comments. Webtoon platforms have their own guidelines when reviewing initial drafts from webtoonists and unless they are in serious violation of human rights or include criminal material, platforms tend to leave the works untouched. Naver did not comment on the recent online attacks.

The feud may have taken place on a webtoon platform, but the source of such online hostility lies deeper in the socio-economic conflict among the younger generation, according to experts.

Sociology Professor Lee Na-young at Chung-Ang University explained that young men have taken their anger out on webtoons but their resentment toward feminism stems from policy makers’ failure to properly address their problems, which resulted in them blaming the most popular and visible target they could find.

“People want to take their anger out on someone, but since they can’t find a proper subject, they target their emotions on those weaker than them,” said Lee, explaining why the comments are so irrelevant to the webtoon itself. “This should be seen as the younger generation’s anger toward the injustices that have built up on their shoulders. The older generation and people with power truly need to understand what the younger people are fighting about and listen to what they want changed.”