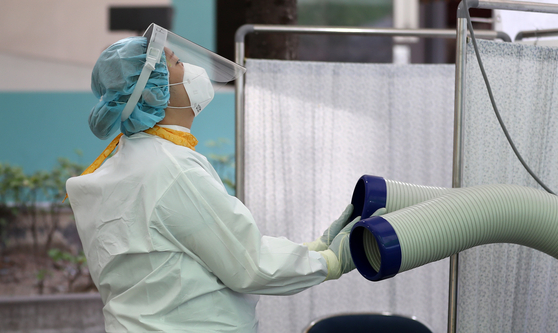 A medical worker uses an outdoor air cooler to beat the heat at a Covid-19 testing site in Daegu on Wednesday. [YONHAP]


Korea reported a new record number of daily Covid-19 cases on Wednesday, despite the capital area being under the strongest level of social distancing measures for over a week. 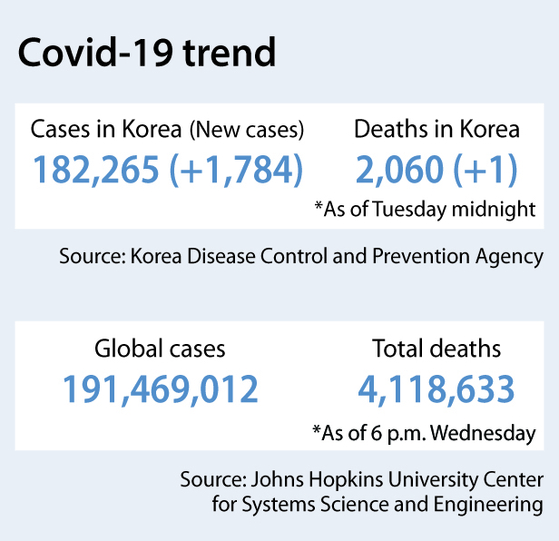 The country confirmed 1,784 cases on Wednesday, including 1,726 local infections, raising its total caseload to 182,265, according to the Korea Disease Control and Prevention Agency (KDCA).

There was one more virus death, raising the death toll to 2,060.

The previous record for daily new infections was last Wednesday's 1,614.

"Basically, the amount of contact and travel among people has increased a lot," Lee Ki-il, a senior health official, said during Wednesday’s briefing, despite social distancing measures being raised to high levels throughout Korea.

"And, about 47 percent of infections in Korea are now from virus variants, and of these, 33 percent are Delta variants, so we believe [the spread of virus variants] also had an effect."

The rate of highly contagious Delta variant cases in local Covid-19 infections was only 2.5 percent in the third week of June compared to 33.9 percent in the second week of July, and health authorities warned it could become “a dominant strain within weeks.”

As the country is swept by a fourth wave of mass infections, patients reported outside of greater Seoul rose to 551, 31.9 percent of the total.

It was the first time daily cases outside the greater Seoul area topped 500 since the first wave of the pandemic in February 2020, when the virus spread in Daegu and North Gyeongsang among followers of the Shincheonji Church of Jesus.

The proportion of confirmed cases in non-capital areas has been above 30 percent for four days in a row.

The number of infected crewmembers who returned following an outbreak of Covid-19 on the Navy’s Cheonghae unit destroyer, which has been stationed in the Gulf of Aden in eastern Africa, will be included in Thursday’s statistics for imported cases.

As of 2:30 p.m. Wednesday, 270 out of 301 members of the 34th contingent of the Cheonghae unit had tested positive for Covid-19, but the number could still increase. 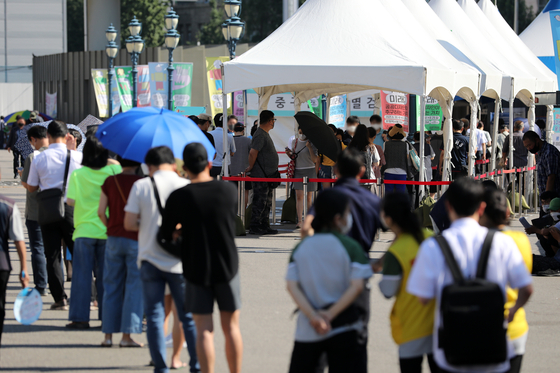 People line up to get tested for Covid-19 at Seoul Station Square in central Seoul on Wednesday as the country's Covid-19 record hit high with 1,784 patients. [NEWS1]


While the highest level of the four-tier distancing measures is to expire Sunday for the Seoul metropolitan area, new distancing rules are expected to be announced later in the week.

"We previously expected the new Level 4 measures, introduced around ten days ago, to be effective [in containing the virus spread], but no effect has yet been seen,” Lee said.

The southeastern port city Busan decided to hike its restrictions to Level 3 from Wednesday as clusters of infections tied to hostess bars and schools continued. Busan recorded it highest daily count of Covid-19 cases, 107, on Wednesday.

Other cities such as Changwon, Tongyeong and Jinju in South Gyeongsang all went to Level 3 from Tuesday, and the central city of Daejeon will go to the same level from Thursday.

Additional measures are also being adopted.

Concerts in unofficial performance venues such as stadiums, parks and convention centers in non-capital areas will be canceled from Thursday to Aug. 1.

The government also prohibited entry of foreign seasonal workers from July 9, and will issue visas only to workers who have received PCR tests at designated hospitals in their home countries. They must use the same test method as in Korea.