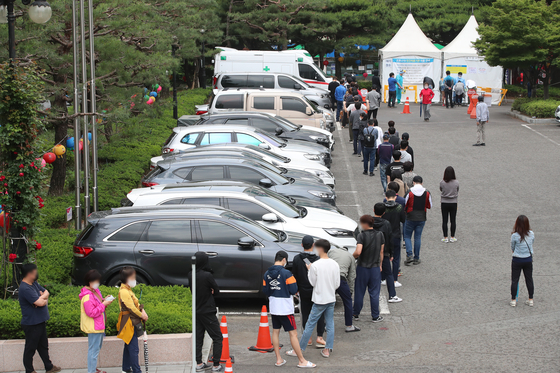 Citizens wait in line to get tested for Covid-19 at a temporary screening center in Daegu on Sunday. Infections tied to adult entertainment facilities are quickly increasing in the city, with 179 cases so far. [NEWS1]


Health authorities confirmed a total of four "breakthrough" infections, or a fully vaccinated person catching the coronavirus — two of which were asymptomatic.

Covid-19 vaccines work in that they help the body form a very high level of immunity against the coronavirus two weeks after completing the recommended dosage — two shots for both AstraZeneca and Pfizer, which are currently being used in Korea.

According to the U.S. Centers for Disease Control and Prevention (CDC), a breakthrough infection is a case in which a Covid-19 virus gene is detected at least 14 days after completing inoculation.

According to the Korea Disease Control and Prevention Agency (KDCA), two of the breakthrough cases were found to have been exposed to the virus before the key two weeks after their second shot.

The two other cases were found to have been infected with the virus at least 14 days after completing their shots, and did not show any symptoms.

Last Friday, a nurse in her 20s living in Busan was reported to be the first breakthrough infection case in Korea.

She received the first Pfizer shot on March 18 and got her second on April 8. She is believed to have been exposed to the virus around Parents’ Day on May 8 — around 40 days after she completed vaccination — tied to a cluster of infections in Ulsan and Busan with a total of 15 confirmed cases.

“We judged that the first case of a breakthrough infection was contracted by a non-virus variant, which is not classified as a ‘virus of concern,’” said Lee Sang-won, head of epidemiological investigation analysis at the KDCA.

There are four major virus variants, from Britain, South Africa, Brazil and India, and the British variant is known to be stronger than conventional viruses.

Another breakthrough case involves a patient in his 30s who lives in Gyeonggi.

He was administered his second dose of the Pfizer vaccine on April 1, but tested positive on May 20 — about one month and 20 days after he completed his vaccination. Authorities are currently examining the exact source and cause of the infection.

Health authorities stressed that breakthrough infections themselves are not a surprising phenomenon.

"There is a possibility of infection no matter which vaccine has been administered,” explained the KDCA, and added that those classified as breakthrough cases generally have mild symptoms or are asymptomatic.

The KDCA said about 40 percent of the new cases were of virus variants, meaning four out of 10 people infected contracted a virus variant. The KDCA reported 277 new variant cases, raising the total to 1,390.

The rate of virus variant detection has been increasing significantly in Korea. The rate in cases of mutations over the past week (May 16 to 22) was 35.6 percent with 277 cases out of 777 Covid-19 confirmed patients, up from 26.8 percent the previous week.

Of the 277 new variant cases, the British variant accounted for the largest number with 243, followed by the Indian variant with 20 and South African variant with 14.

Among Koreans who arrived from India through chartered flights since early May, there were a total of 52 positive cases, 10 of them being infected with the Indian variant.