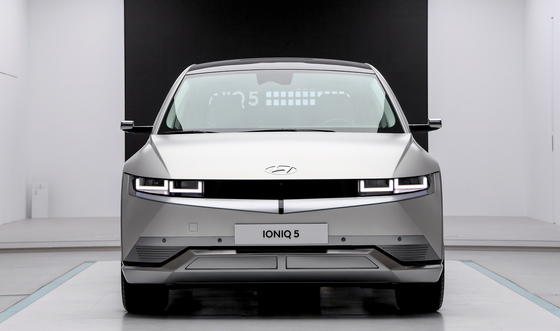 Hyundai Motor’s electric vehicle (EV) drive is facing an unexpected bump in the road as it has been forced to slash production of its ambitious Ioniq 5 SUV due to a shortage of components.

Hyundai Motor had planned to make 10,000 Ioniq 5s in April at its Ulsan factory, but has now slashed that goal to 2,600 units as Hyundai Mobis, an auto parts affiliate of Hyundai Motor, failed to manufacture enough electric motors for the model.

“There has been a production issue at our Daegu factory in manufacturing enough electric motors,” a spokesman for the auto parts company said Monday.

Electric motors are a core component of an EV and play a decisive role in the car's performance, along with the battery.

The production delay will also impact other suppliers.

“Contractors have been told to secure auto parts components for at least five working days ahead of the Ioniq 5 production schedule,” said a source at a separate contractor working with Hyundai Motor. “With the reduction of production for April, extra costs are expected to maintain the inventory.”

Hyundai Motor’s Ioniq 5, the first EV model to be manufactured on the carmaker’s dedicated modular platform E-GMP, was a hit as soon as its specs were disclosed last month.

In Korea, more than 35,000 reservations have been placed for the model. The 3,000 units earmarked for preorders in Europe sold out as soon as reservation opened.

“We plan to start delivering the Ioniq 5 to customers both in Korea and Europe within the second quarter,” a Hyundai Motor spokesman said.