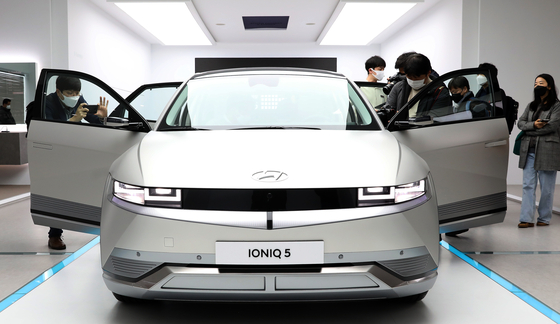 
Hyundai Motor’s Ioniq 5, the first electric vehicle (EV) on its dedicated E-GMP platform, has already run into problems before it even makes it off the production line.

After having to cut down its April manufacturing plan from 10,000 cars to less than 2,500 due to a chip and motor shortage, the detailed specs of the Ioniq 5, such as the range and maximum speed, announced by the Ministry of Environment on Wednesday fall short of expectations.

The rear-drive Ioniq 5’s long range version equipped with a 72.6 kilowatt-hour battery was given a range of 405 kilometers (252 miles) in normal temperatures by the ministry, falling slightly short of the figure given by Hyundai Motor, which said it could drive up to 430 kilometers.

The ministry also said the range would fall to 354 kilometers when driving at low temperatures. Its maximum speed was 185 kilometer per hour (115 miles per hour), according to the ministry.

Hyundai Motor had emphasized the upgraded specs of its EV lineup to be manufactured on its dedicated E-GMP platform, announced last year. The range of EVs made on the E-GMP will be able to boast a range of 500 kilometers per charge, the carmaker had said.

The 405 kilometer range is on par with Hyundai Motor’s previous EV models including the Kona Electric long range version, which can drive 405.6 kilometers per charge.

As well as slashed production and specs discrepancy, the Ioniq 5 could also fall foul of the speed at which EV subsidies are disappearing.

Korea's EV subsidy plan is based on a first-come first-served strategy, but the issues at the Ioniq 5's manufacturing at Ulsan factory which went into a week-long shutdown on April 4, might mean there's not enough money left in the subsidy pot to cover nearly 40,000 pre-order reservations already placed.

In fact, according to the Ministry of Environment, 29 percent of subsidies allocated to EV purchases in Seoul have already been used as of April 1. Only 1,804 of the 2,534 slots remain for EV subsidy applications in Seoul, the ministry explained.

Things are not much different in other regions too. Busan, for example, had given out 30 percent of its subsidies as of April 1, the ministry said.

Ioniq 5 customers are not even eligible to apply for the subsidy plan yet as the model hasn't officially launched. Only when the delivery time is set will customers be able to apply for subsidies — if there is any money left.

While it remains to be seen whether the Ioniq 5 can be delivered to customers within April as originally announced, EV manufacturer Tesla is upping the ante here to expand sales and get as much subsidy as possible.

In March alone, Tesla sold 3,186 units of its flagship Model 3 in Korea, presumably accounting for the large number of subsidies already used. No other EV model, either from domestic or imported carmakers, was able to sell more than 1,000 units last month. The Model Y, will also start deliveries to Korean customers within the second quarter, make the competition for the discounts even fiercer.

The Ministry of Environment is banking on a supplementary budget to expand its subsidy plan.