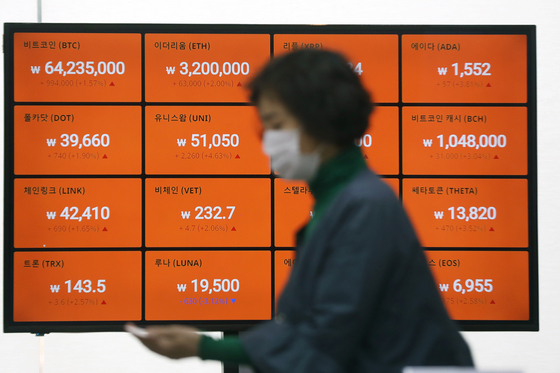 Prices of Bitcoin and altcoins, including Chainlink and Tron, are displayed on a digital screen on April 29 at Bithumb’s office in Gangnam, southern Seoul. [NEWS1]


From fraudulent exchanges to government regulations forcing smaller platforms to suspend business, investors are constantly threatened by possible exchange shutdowns. With no depositor protection for cryptocurrency trading, any losses are eaten by the investors.

A retail investor bought altcoins – minor coin alternatives to bitcoin – including Dogecoins worth 200,000 won ($180) three years ago at CoinExchange. After being hit hard by the 2018 cryptocurrency crash, he decided to forget about the purchases. Even if he wanted to withdraw the altcoins, he would get almost nothing.

With Dogecoin prices recently skyrocketing, he rushed to CoinExchange to withdraw profit, just to find out that it shut down in 2019. The 200,000 won worth Dogecoin would be valued at some 14.8 million won today.

Despite contacting CoinExchange through Twitter, he never received an answer.

Unlike registered financial institutions that are required to be licensed by financial authorities, such as the Financial Services Commission (FSC), cryptocurrency exchanges only have to register at a local tax office. Lower hurdles for exchanges also mean that just about anyone, even those who are unqualified, can open businesses.

“There are phony companies that offer so-called business consultations, saying that they can help set up cryptocurrency trading platforms for no more than 10 million won,” said a spokesperson for a local exchange, on the condition of anonymity. “Such exchanges don’t have the necessary infrastructure or required security standards to trade virtual assets.”

Investors are on the hook for all losses, and may even have to walk away empty handed.

One example is Coinnest. In January, a court upheld an 18-month prison sentence for Kim Ik-hwan, co-founder and CEO of Coinnest, for receiving hundreds of millions of won worth of bitcoin as a bribe for arranging the listing of an unnamed altcoin. Coinnest had to shut in 2019. Posts written by coin holders trying to make withdrawals from Coinnest are common on crypto community websites.

An anonymous post on Naver Cafe. According to the post, the writer wasn't able to withdraw virtual assets from Coinnest after the exchange shut down. [SCREEN CAPTURE]

“The government needs to make cryptocurrency guidelines, giving exchanges the authority to list new virtual assets but making them hold full responsibility if found to not provide necessary information or to list fraudulent ones,” said Park Seong-jun, head of Dongguk University’s Blockchain Research Center. “We need to consider virtual assets as a proper asset, so that regulations can ensure checks and balances."

The implementation of the amendment to the Act on Reporting and Using Specified Financial Transaction Information, which only allows investors to trade cryptocurrency via real-name accounts, may also bring chaos.

Failing to find partner banks that issue real-name bank accounts could force exchanges to close. In the worst case scenario, traders may fail to withdraw their deposits amid the massive shut down. Unlike banks, crypto exchanges don’t have to hold a certain amount of money to prepare for withdrawal demands.

If exchanges are swamped with investors trying to withdraw money, there can be transaction delays or insolvency problems. Complaints were recently voiced as volume dropped on some exchanges and it took days to sell off large positions.

There is also no clear way to verify if the exchanges are selling virtual assets that they actually own, or if they are faking it.

“We will do our best to notify investors ahead of enforcing the amendment so that they can safely withdraw their money,” said a spokesperson for the FSC. “Investors must keep in mind that if an exchange shuts abruptly, their deposits can’t be protected and there is no other way for them to get the money back aside from filing a civil lawsuit.”