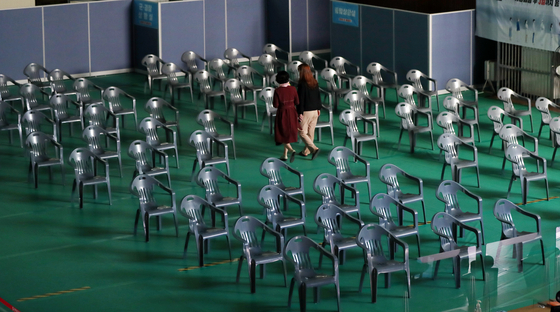 A vaccination center in Buk District in Gwangju is empty Monday amid a temporarily halt in the first vaccinations of people over 75 because of a shortage of Pfizer vaccine supplies through at least mid-May. [YONHAP]

First coronavirus vaccine jabs have been temporarily suspended in various cities nationwide as supplies run out, and health authorities insisted Monday that more doses are on their way.

The government claimed to have procured Covid-19 vaccines for 18.09 million people in the first half of the year, but the supply has faltered amid a global shortage.

Health authorities last week asked local governments to refrain from scheduling new appointments for people to receive their first Pfizer jab until at least mid-May to ensure that other people can get their second shots. It also confirmed Sunday that there were fewer than 10 percent of the country's AstraZeneca vaccine doses left, with reports that first AstraZeneca jabs could also be temporarily halted.

This throws into doubt Korea’s target of inoculating 12 million people out of a total of 52 million by the end of June and achieving herd immunity by November. Some 9 million people would have to be vaccinated in the next two months.

Despite public concerns over the hiccups, health authorities Monday announced plans to expand the inoculation program to include members of the public over 60 in its target group for first half of the year.

Health authorities also confirmed that Korea will receive 14.2 million doses in May and June, enough to cover some 13 million people by the end of June, according to initial targets.

After beginning to vaccinate people over 75 since the beginning of April, the government announced Monday it will expand inoculations in the second quarter to seniors between 60 and 74, according to a joint briefing by health authorities Monday afternoon.

Some 4.94 million people in this age group, or those born between Jan. 1, 1947, and Dec. 31, 1961, will be able to get vaccinated with the AstraZeneca vaccine starting from late May. The government initially had intended to vaccinate those over 65 in the second quarter, but expanded the age bracket because people over 60 are more likely to develop severe cases of Covid-19 and die. Those over 65 can start getting vaccinated from May 27 and those over 60 starting June 7.

Health officials Monday urged the public not to worry about vaccine shortages and to actively participate in inoculations when it is their turn.

People who have chronic and severe respiratory diseases will be inoculated later this month, while 364,000 teachers of kindergartens and lower elementary grades can get jabs starting next month. Essential social workers and military personnel under 30 can expect to get Pfizer vaccines starting next month.

An additional 1.67 million doses of AstraZeneca's vaccine and 297,000 doses of Pfizer's vaccines are expected to be supplied by June as well through the Covax Facility, the World Health Organization's global vaccine-sharing mechanism, officials said.

Health authorities said they are negotiating with the three other pharmaceutical companies it has contracts with--Moderna, Novavax and Johnson & Johnson’s Janssen--to import some of their vaccines in the first half of the year.

In an attempt to address mounting concerns over vaccine shortages, President Moon Jae-in said at an interagency Covid-19 response meeting at the Blue House Monday that vaccinations are “going smoother than initial plans.”

He said he had been briefed that Korea could raise the inoculation target of 12 million people by the end of June to 13 million.

Moon said, “Pfizer vaccines are being stably supplied on a weekly basis in May, and we are expected to receive more AstraZeneca vaccines than initially anticipated.”

He continued, “The government is effectively distributing the amount of vaccines introduced for the first and second inoculations according to meticulous plans.”

However, Oh Myoung-don, a professor at the Seoul National University Hospital’s Infectious Diseases Department who heads the central clinical committee for emerging disease control, said that “even if 70 percent of the population is vaccinated, it will be difficult to reach herd immunity.”

Oh said in a press conference Monday, “As we will have to learn to live with the coronavirus every year, like the influenza, instead of eradicating the virus, we should focus on minimizing the damages and severity of illnesses."

The government confirmed 82 deaths reported after vaccinations, adding three new deaths as of Saturday at midnight.

Two men administered with Covid-19 vaccines, both living in South Gyeongsang, died over the weekend. Health authorities said there were no confirmed causal links between the inoculations and their deaths.

The JoongAng Ilbo reported Monday that that one man in his 50s was found dead in his home Sunday morning after receiving the AstraZeneca on April 26. The man reported symptoms including a fever and had underlying conditions. He was taking blood pressure medication.

Another man in his 70s from Geochang County in South Gyeongang who received his first Pfizer shot on April 23 died Saturday in a hospital intensive care unit in Daegu.

He did not show any immediate abnormal symptoms but complained of chest pain on April 26 and was transferred to a hospital. He suffered from chronic diseases including high blood pressure.

Police said that there didn’t appear to be a link between the inoculation and his symptoms.

Another police officer stationed in Ilsan, Gyeonggi, also in his 50s, received his first AstraZeneca jab Monday and was transferred to the hospital due to difficulty breathing the next day and received I.C.U. care. He has since regained consciousness and  indicated he had no chronic illnesses and had not been on any medication. 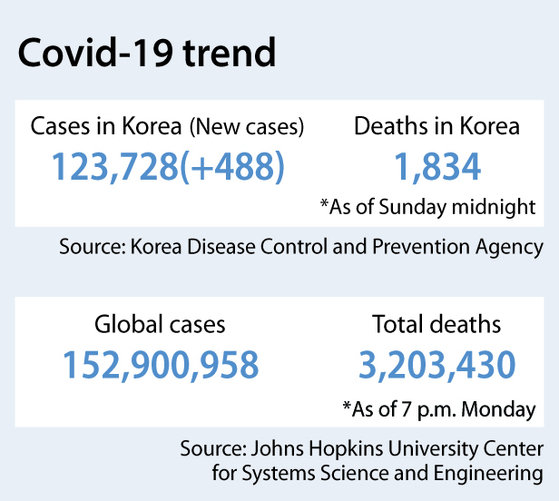 One more person died, raising the total death toll to 1,834.

Daily cases were down from the 600s recorded in the past several days but reflect fewer tests over the weekend.

There were 23 imported cases.

Of new domestic transmissions, 123 cases were in Seoul, 129 in Gyeonggi, 14 in Incheon, 33 in South Gyeongsang, 31 in North Gyeongsang and 24 in South Jeolla.