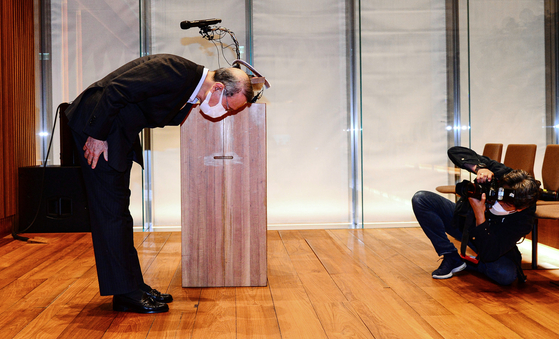 
The chairman of Namyang Dairy Products offered to resign following claims that one of the company’s drinks protects against Covid-19 infections.

His announcement came a day after the company’s CEO tendered his resignation.

At company headquarters in Gangnam, southern Seoul, Chairman Hong Won-sik, who owns 51.7 percent of the company, apologized for the outrage and disappointment that was expressed after the Bulgaris yoghurt drink was said to be effective against the virus.

The head of Namyang’s research institute argued last month at a symposium that Bulgaris reduces the chance of a Covid-19 infection by 77.8 percent.

Namyang’s stock jumped after the remarks and the product flew off the shelves.

Since Namyang made the claims, the Ministry of Food and Drug Safety accused the company of violating advertising laws, and the police raided the company headquarters and its factory in Sejong last week.

“I will take all the responsibility and will step down from the chairmanship of Namyang Dairy Products,” Hong said Tuesday. He also vowed not to pass control of the company to his children.

The chairman added, “I am deeply sorry for causing a delay in making the decision,” and asked that the company not be shunned.

As with the CEO, the chairman did not address whether the claims about Bulgaris were inaccurate or not, and the claims have not been retracted.

In addition to speaking about the recent Bulgaris dustup, Hong also apologized for earlier failures by the company and his family, including the indictment of a niece for drug use, the forcing of wholesalers to over order and a range of abuse claims that led to a consumer boycott.

Namyang was founded in 1964, and Hong is the late founder’s eldest son.

The company’s fortunes have been on the wane in recent years, especially follow the reports of gapjil.