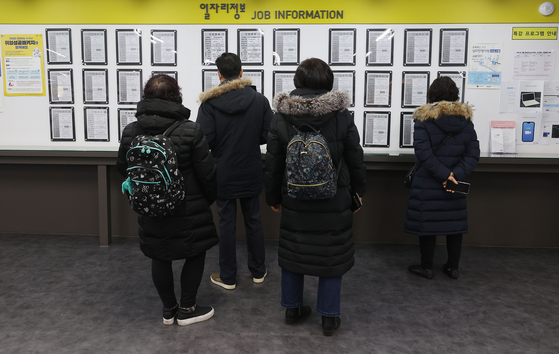 People look at a bulletin board at a job center in Mapo District, western Seoul on Jan. 13. Due to Covid-19, job losses last year were the largest since the Asian economic crisis of the 1990s. [YONHAP]


The coronavirus pandemic took a greater toll on jobs for women, especially if they were married.

In past economic crises, the jobs that were lost were mostly held by men, according to a report released by the Bank of Korea Thursday.

“Normally, male-dominant sectors like construction and manufacturing tend to move in line with global economies,” said Oh Sam-il, a senior economist on the central bank’s labor market research team. “In economic downturns, employment in those sectors were predominantly affected.”

During the latest crisis, however, jobs held by women were affected because women dominate certain service sectors and education. Women workers were also forced to take care of children at home as schools shut down, the report said.

According to the report, married women lost the most jobs during the pandemic.

The report said Covid-19 partly contributed to increasing male workers’ participation in taking care of children at home, which could lead to improved working conditions for female workers in the long run.

In 2020, workers going on paternity leave increased by 23 percent. Male workers applying for working hour reductions for the sake of childcare, a system protected by labor law, increased by a whopping 120.9 percent.

“This shared responsibility in childcare is expected to boost women’s employment rate in the long run,” the central bank report said.

The report, however, said that continued employment risks from the pandemic could result in industries employing robots for simple tasks rather than human workers.