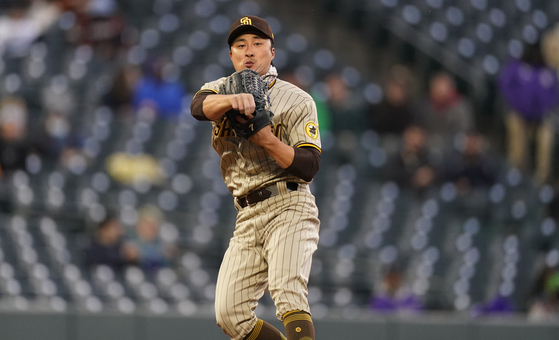 Kim Ha-seong throws to first base to put out Colorado Rockies' Garrett Hampson during the third inning on Tuesday in Denver, Colorado. [AP/YONHAP]


Kim Ha-seong of the San Diego Padres appeared as shortstop in a game against the Colorado Rockies on Tuesday, stepping back into his old KBO position after Fernando Tatis Jr. tested positive for Covid-19.

Kim picked up one hit in five at-bats, recording an RBI and a run while striking out twice.

The former Kiwoom Heroes star has appeared as a utility player since joining the Padres, filling whatever gaps were left in the team's infield.

According to Padres beat reporter Kevin Acee of the San Diego Union-Tribune, Kim entered the game leading the Padres with six defensive runs saved. He added an inning-ending double play to that tally in the fifth inning on Tuesday.

Kim got off to a slow start during spring training with the Padres, picking up seven hits in 42 at bats with one RBI. Since the season has started, he appears to be adjusting, but his main strength has been defense this season as he still struggles to wake up his bat.