Two career highs in one week: Kim Ha-seong has arrived

Two career highs in one week: Kim Ha-seong has arrived 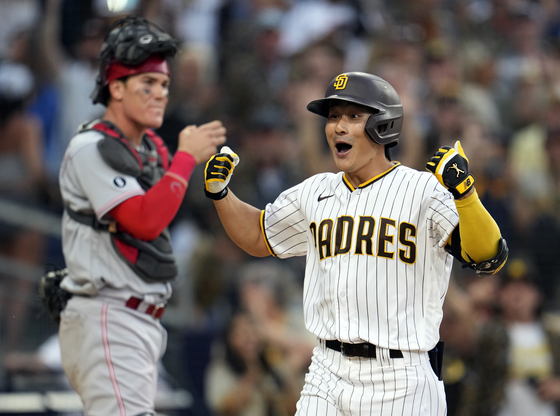 
The weather is warming up and so is Kim Ha-seong's bat — after a slow start to the 2021 season, the San Diego Padres' utility player is starting to look comfortable in the majors.

Those may not be Hall of Famer numbers, but they do show dramatic improvement over the last few months. In April, Kim's first month in the MLB, he had 11 hits in 50 at-bats, picking up four RBIs and a home run for a .220 batting average.

Those numbers have jumped up in June, although Kim has spent a lot less time at the plate. Appearing often as a pinch hitter this month, Kim has had just 28 at-bats so far, recording nine hits, five RBIs and two homers for a much more impressive .321 batting average.

But Kim isn't just getting a few knocks in, he's also proving increasingly productive at the plate. His batting average may have fluctuated over the last few months, but his slugging percentage — a measure of batting productivity that prioritizes extra-base hits — has steadily risen.

These June figures are hugely inflated by the two home runs he hit this month and the limited amount of time he spent at the plate, but the fact still remains — Kim is starting to prove to be the major league player the Padres always said he could be.

That potential has been decisively on display over the last week, with two home runs coming in the last four games, both in spectacular fashion.

Kim's first homer of the month came on Saturday against the Cincinnati Reds at Petco Park in San Diego. After entering the game in the fifth inning following an injury to starting shortstop Fernando Tatis Jr., Kim ripped a two-run game-winning homer into the Western Metal Building at the bottom of the eighth.

That big fly proved crucial, giving the Padres a 7-5 victory in front of a full home crowd. Rounding the bases with fans screaming his name and a big smile on his face, Kim later described the play as one of the top three moments of his career.

It was a decisive moment for Padres fans as well, proving that their recent import wasn't just a solid defender and a fun figure in the dugout, but also a serious contender at the plate and very quickly, a local hero.

Kim struck again on Tuesday, appearing as a pinch hitter in the fifth inning to blast a solo home run off Clayton Kershaw of the Los Angeles Dodgers to give the Padres a 3-0 lead. Kim's homer again proved crucial, as the Padres run the game 3-2.

While Tuesday's outing might not have been a headline-making play like Saturday, it did hold special meaning for Kim. Hitting a home run off a pitcher as dangerous as Kershaw — famous in Korea not just for his dominant career but also for his years spent playing alongside former teammate Ryu Hyun-jin. Kershaw is also Kim's mother's favorite player, adding an extra element of triumphant to Tuesday's game.

The KBO veteran has also been showing off his defensive prowess. Kim played as a shortstop for the Kiwoom Heroes in the KBO, but has switched positions with the Padres, playing at second, third and shortstop. Although he hasn't had that many starts this month, his fielding skills are already well established in San Diego.