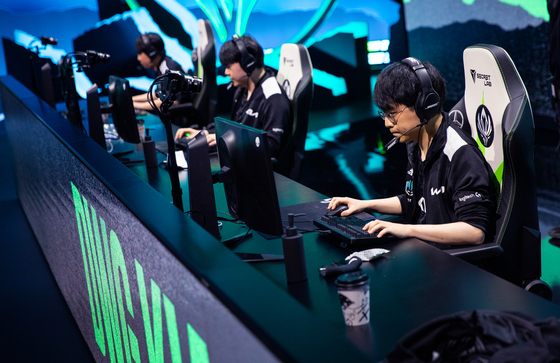 DWG KIA plays on stage at the 2021 Mid-Season Invitational, the second most prestigious tournament in League of Legends esports. This year's event is being played without a live audience at the indoor sporting arena Laugardalshöll in Reykjavik, Iceland. [RIOT GAMES]


Per expectations, DWG KIA are through to the next round of the 2021 Mid-Season Invitational — but shaky performances on the last day of the group stage have raised serious concerns about their form.

North America's Cloud9 shocked League of Legends fans on Tuesday by taking down the reigning world champions in the first match of the night. The game was relatively close throughout, but C9 showed more discipline and eventually capitalized on their compositional edge in the late game.

Fudge proved his pick's worth by putting on an MVP-worthy display over the entire game, netting a handful of individual highlights including a flashy solo kill on Kim "Khan" Dong-ha in the bottom lane. Canyon, on the other hand, did have some inspiring moments but hardly lived up to his usual brilliance.

Philippe "Vulcan" Laflamme thoroughly outperforming Jo "BeryL" Gun-hee — widely considered one of the two best supports in the world prior to MSI — was also a crucial factor in C9's victory.

In his post-match interview, C9 jungler Robert "Blaber" Huang revealed that his team had been confident going into the game: "After we played [DWG KIA] the first time, and [after] we watched them play against DFM, we [realized] they're not the kings anymore. Even though they are an extremely good team, they're definitely beatable."

Despite the unexpected setback, DWG KIA soon secured qualification to the next round by taking down Latin America's Gillette Infinity. Even in that game, however, head-scratchers were frequent. BeryL continued to get caught out in dangerous positions, and the team as a whole seemed rather unfocused and uncoordinated. While victory was gradually eked out, the showing was not reassuring.

After the win, Khan attributed their loss against C9 in the previous game to the team "trying out new compositions" in hopes of "diversifying strategies", as their 3-0 start from the previous week meant they could afford a few losses today. He added that going into the next stage, his squad would probably stick closer to tried-and-true techniques, although efforts to expand their playbook would still go on behind closed doors.

With tickets already in the bag, DWG KIA chose to go for another test run in their final match against Japan's DetonatioN FocusMe, with Canyon taking out Diana for a spin and Heo "ShowMaker" Su last-picking Yasuo. Again, DWG KIA were able to ultimately outmuscle their way to victory — but again, raised many an eyebrow by taking more than a few punches to the face in the early stages of the game.

"I'm relieved we ended on a win," Canyon said after the match. "We'll have to work hard and improve our form, though. [...] We'll make sure to not let our guard down in the rumble stage." He also shared that the unorthodox Yasuo-Diana duo was utilized at head coach Kim "kkOma" Jeong-gyun's insistence.

The top two teams of each group now move on to the next round of MSI — a six-team double-round-robin dubbed the "rumble stage" which will start this Friday and run for five days. The top four teams from the rumble stage will then advance to a single-elimination semifinal bracket to close out the event.

While DWG KIA's recent form is indeed worrying, especially considering how they had been touted as tournament favorites prior to flying out to Iceland, extrapolating too much from one-off games played in the group stage may prove fallacious. Recalibrating strategies on the fly in a foreign environment may not be an easy task, but the team has previously bounced back from far worse dips in performance.

In any case, LCK fans will hope to see their representatives come back with a vengeance on Friday.