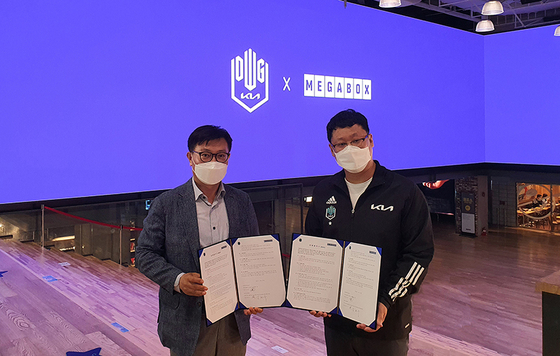 Kim Hyun-soo (left), director of Megabox's multiplex division, and DWG KIA owner Lee Yu-young pose for the cameras with copies of the memorandum in hand. [MEGABOX]


DWG KIA will help establish and promote esports arenas and gaming areas within existing Megabox movie theaters under a memorandum of understanding (MOU) signed by the two companies on Tuesday.

Megabox announced Wednesday that it would build esports arenas and PC bang, the internet cafes popular with gamers, within some of its theaters, and look to host amateur tournaments at those facilities in partnership with esports organization DWG KIA.


DWG KIA is best known for its world-class League of Legends roster, who won the past two domestic league titles and the 2020 World Championship. Megabox, an affiliate of the Korea JoongAng Daily, is the third-largest cinema franchise in Korea, behind CGV and Lotte Cinema.


The two parties agreed to cooperate on developing a new track for amateur esports enthusiasts at DWG KIA's existing education venture, Damwon Game Academy. Details of the program are yet to be finalized, but it is likely that the academy will run the operation while Megabox provides the venues.


The idea of launching "a new brand" that incorporates DWG KIA's intellectual property was mentioned as well. According to Megabox, however, nothing concrete could be shared as to how exactly the two parties plan to collaborate as this matter is still being discussed.


DWG KIA owner Lee Yu-young stated that the club was "looking forward to what synergies might emerge" from partnering with a movie theater chain with close to a hundred physical branches across the country.


Kim Hyun-soo, director of Megabox's multiplex division, stated that the company hopes to "contribute to the expansion of esports infrastructure" and accelerate the transformation of their movie theaters into a "lifestyle space platform."


The recent concurrence of the global health pandemic and the meteoric rise of over-the-top (OTT) media services have led to financial difficulties for the domestic multiplex industry, with virtually all movie theater chains going deeply into the red. In 2020, visitor numbers dropped by over 70 percent compared to the previous year. To stay afloat, most franchises, including Megabox, were forced to shut down a number of locations and put employees on unpaid leave.


The situation will most likely improve as vaccinations increase, but whether cinemas will be able to reclaim their former popularity is unknown as the industry is currently hard-pressed to find new avenues for growth.


Embracing esports beyond the occasional screening of a big match — which both CGV and Megabox have experimented with — may be one potential breakthrough. CGV is already an official sponsor of League of Legends Champions Korea, the nation's largest domestic esports league.