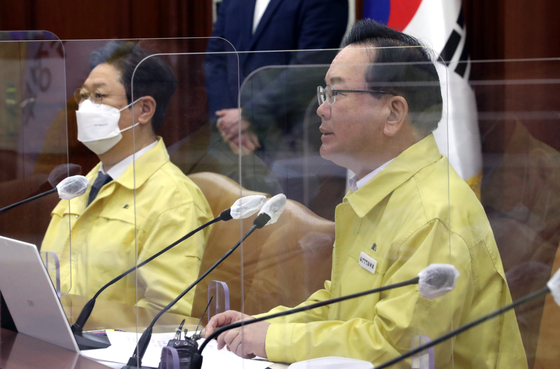 Prime Minister Kim Boo-kyum presides over a meeting at the Central Disaster and Safety Measures Headquarters in Seoul in October. [YONHAP]


JANG JOO-YOUNG
The author is a national news editor of the JoongAng Ilbo.

It is officially called “lime-colored,” but some say “chick-colored” and others call it “mustard-colored” when referring to the civil defense uniform. The civil defense jacket has become familiar in the past two years as the Covid-19 pandemic spread. President Moon Jae-in and other officials of the central and local governments wore the jacket when they made briefings on Covid-19.

Actually, the jacket is not made for the civil servants. Any one of the 3.5 million civil defense members between the ages of 20 and 40 can wear the jacket. According to the Ministry of the Interior and Safety’s “Civil Defense Uniform Regulation,” the minister or local government heads can provide civil defense uniforms to its members, if necessary, within the budget. One of the most notable situations to wear the uniform is at a “disaster site,” and that’s why people often think it exclusively belongs to civil servants.

Civil defense is a system created to protect the lives and property of the people in times of a war or national disaster. Since it was established in 1975, security was considered the most important reason during the Cold War. The uniform was the hunter green color of the military uniform until 2005. But lately, as disasters increased, they play a bigger role. Sweden, Britain, Denmark, the U.S., Israel, Switzerland and Germany also operate a civil defense system.

Covid-19 not only made the civil defense uniform familiar but also changed the training system. From next year, the emergency call training for members of more than five years has been abolished, and third and fourth-year group training will be replaced with online programs.

The Ministry of the Interior and Safety explained that the training system was efficiently improved to accommodate the Covid-19 situation and changed digital environments. As in-person training became a challenge, there is no need to maintain the old system, especially with technological advancements. As the pandemic accelerated the change, I hope Covid-19 will remove the civil defense uniform from government officials next year. As the year is ending and a new year is approaching, I earnestly wish for the end of Covid-19.