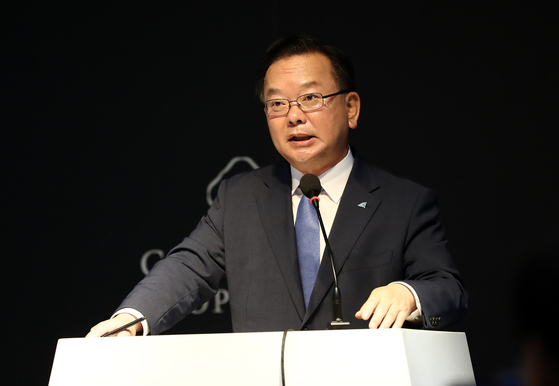 At a voting session arranged by National Assembly Speaker Park Byeong-seug, a motion to approve Kim's appointment was passed by the ruling Democratic Party (DP). Lawmakers from the main opposition People Power Party (PPP), who have protested other cabinet nominees, attended the session but did not vote.

Of the 176 lawmakers who cast votes, 168 supported Kim as prime minister.

Earlier in the afternoon, the DP and PPP had a final negotiation on the fate of Kim, but failed to come to agreement. Speaker Park, then, announced that a voting session would take place at 7 p.m. for the motion. He used his special power as speaker to introduce the bill.

Moon carried out major reshuffles of the cabinet and the Blue House in April, naming Kim, a former interior minister, as prime minister. He also replaced five ministers and presidential secretaries to acknowledge his party's crushing defeats in by-elections, including mayoral races in Seoul and Busan. That rout, in addition to Moon's plummeting approval rating, is considered a crucial political setback for the ruling party ahead of next year's presidential election.

While two of Moon's cabinet picks received bipartisan support, the PPP has refused to endorse three others over alleged ethical lapses. The political deadlock, however, saw a turning point earlier Thursday as Park Jun-young announced his decision to stand down.

Speculation followed that the DP and PPP would be able to strike a deal to confirm Kim as prime minister as well as the two other contested minister nominees, but the PPP insisted that science minister-nominee Lim Hye-sook must also resign. Moon has strongly supported Lim, stressing that he wants to keep her for the sake of gender balance in the cabinet.

Kim, 63, served as minister of interior and safety in Moon's administration from July 2017 to April 2019.

He is also a former four-term lawmaker. He won his first legislative victory in 2000 in Gunpo, Gyeonggi. He was reelected in 2004 and 2008, but decided to run in Suseong A District of Daegu, a traditional stronghold of the conservative opposition, in 2012 and was narrowly defeated. In 2016, Kim ran again and scored 62.3 percent to win his fourth legislative victory. It was the first time in 31 years for a DP candidate to win a seat in Daegu.

He sought reelection in Daegu last April, but lost to Joo Ho-young, a political heavyweight who served as floor leader of the PPP until recently.