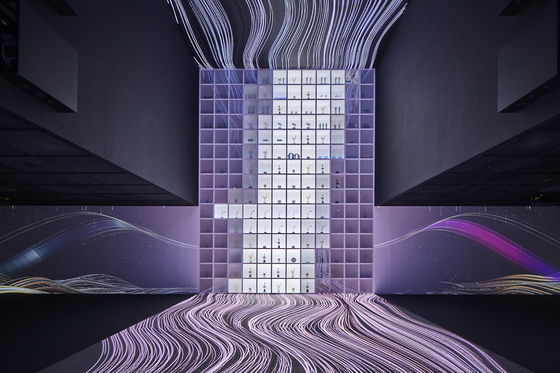 The ″HYBE Music″ section is a room with light projected onto the walls, ceiling and floor, to give an overwhelming visual experience as if stepping into a whole new digital world. A 7-minute video on the history of HYBE and its artists is played, during which an 8.5-meter- (28-foot)-high wall filled with trophies earned by HYBE’s artists is lighted. [HYBE]


Whatever has been done before in K-pop, HYBE does better. K-pop agencies have created exhibit spaces in the past, but HYBE takes it one step further in both content and form with its newly-opened museum HYBE Insight.

HYBE Insight opened on Friday as the company’s cultural complex and museum on two basement floors of HYBE’s new headquarters in Yongsan, central Seoul. HYBE has been promoting its slogan, “Resonating and sharing sound influence through music and bringing change to life,” since adopting its new name last month, which has finally come to life as an exhibition featuring art, media, fashion and music.

It is a must-go space for fans of artists signed to the HYBE Labels — BTS, Tomorrow X Together, Enhypen, NU'EST, Seventeen and GFriend — but also worth a visit for anyone interested in HYBE itself, which is writing its name down as the biggest K-pop company in Korea. However, the strictly HYBE-oriented exhibit may not be a big attraction for fans of K-pop in general or people with just a light interest in Korean pop music.

HYBE Insight serves two main purposes: Providing a closer look into how the artists at HYBE Labels make and perform their music, and promoting the pioneering path that HYBE has taken in the past couple of years. HYBE did not reveal the production cost of the museum, but the installations in the space don't require specific digits to make visitors realize the hefty amount of money that would have went in. The museum even rents out the latest Galaxy S21 smartphone devices to visitors to make sure they get the full experience using the guided tour app. 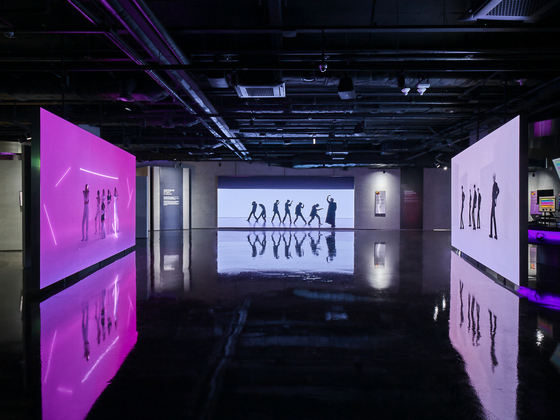 The ″Dynamic Movement″ section within HYBE Insight shows the choreography videos of HYBE's artists without the original music to help audiences appreciate the movement of the dance on its own. [HYBE]

The “Intro: Portal” officially starts off the exhibition. A dark tunnel filled with ambient light and sound makes visitors feel like they're being “sucked into the museum,” as described by the staff, and leads into a vast exhibition hall. The sections “Innovative Sound” and “Inspiring Story” feature video interviews with HYBE’s artists who talk about how they get inspired and explain the background stories of some of the songs they’ve written in the past. Props that were used by the artists on stage are also on display in addition to computers running the programs that the musicians use when creating their music.

The next section, “Dynamic Movement,” consists of four large-scale digital panels that play videos of HYBE artists’ dance practices, displayed in a way that makes viewers feel like they themselves are recording the practice on site. The section also displays pictures taken in a method called chronophotography where each second is captured and printed on the wall. There is also an exhibit called “Behind the Sweat,” taking the title from BTS’s famed hit “Blood, Sweat and Tears” (2018).

After making it through the previous sections, the highlight of the first section is unveiled. One giant digital panel that takes up an entire wall splits in half and opens slowly to unveil a room called “HYBE Music.” The room takes a look at props and media art related to groups' background stories, commonly referred to as a “universe,” like the Marvel Universe. Light is projected onto the walls, ceiling and floor, to give an overwhelming visual experience as if stepping into a whole new digital world. A 7-minute video on the history of HYBE and its artists is played, during which a wall 8.5 meters (28 feet) high filled with trophies earned by HYBE’s artists takes the spotlight.

Many media art museums play with light by shining down on the walls and floor, but to have all four sides of the room covered gives a magnificent viewing experience, making the promotion extravaganza feel shorter than 7 minutes.

Ascending to the first basement floor, what at first appeared to be an exhibit solely focused on music now expands into other genres of culture. It begins with “Seven Phases,” a section filled with works of art by esteemed illustrator James Jean that were inspired by BTS and its seven members. There are seven woodcarving installations and seven illustration pieces that symbolize each member, with one large-scale painting titled “Garden” where the members of BTS have been depicted as nymphs in a garden that give life to and console the hearts of visitors.

Past works and sketches for the works by Jean are also exhibited along with a video showing an interview where he talks about how he was inspired to create the works. 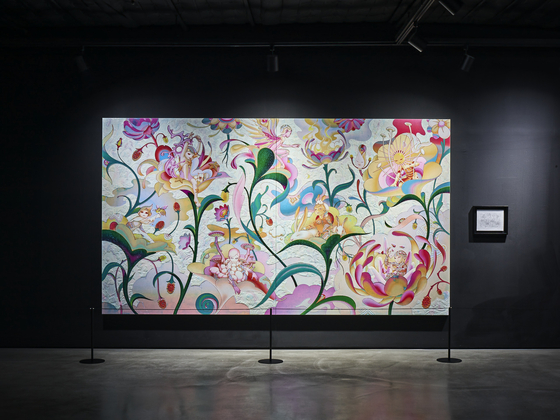 In a painting titled “Garden” by James Jean, the members of BTS have been depicted as nymphs in a garden that give life to and console the hearts of visitors. The painting, as well as others by Jean, is on display at a section of the museum titled ″Seven Phases.″ [HYBE] 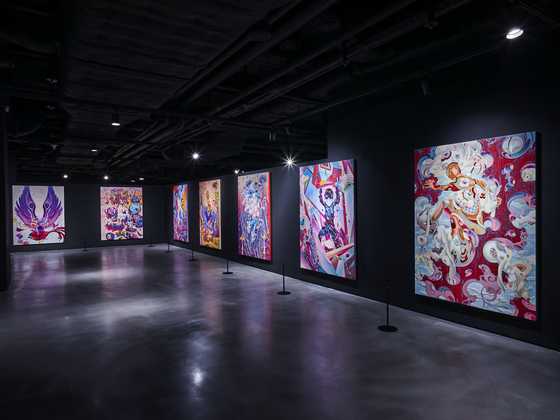 “Seven Phases” is a section filled with works of art by esteemed illustrator James Jean that have been inspired by BTS and its seven members. There are seven woodcarving installations and seven illustration pieces that symbolize each member. [HYBE]


The following section “Ways of Listening” provides a more hands-on experience for visitors, with opportunities to play mobile rhythm games and take part in an interactive game called Let’s Move by copying the choreography projected on the wall. Costumes worn by BTS and NU’EST along with rings worn by Seventeen are put on display. A small-scale diorama of music video shoot settings are displayed for BTS’s “Dynamite” (2020), Seventeen’s “Don’t Wanna Cry” (2017) and NU’EST’s “Face” (2014).

As the exhibition nears the end, HYBE introduces a stark contrast through its “Resonance” section, a room filled with sound-absorbing foam that creates a space for “meditation to reflect upon the meaning of music,” according to the museum. It is meant to help people appreciate the power and meaning of music by experiencing being in a completely silent room where no sounds are present except for your own breath and that of others.

The finale is “Music is My Life,” a 10-minute video consisting of interviews from HYBE’s artists who each talk about their own stories of music. Visitors are free to sit down on the cushions provided. The museum shop outside the exhibition is filled with all sorts of goodies for fans, though some items may be a little pricy. Visitors can make on-site purchases, and some items are only available on the company’s fan community app Weverse Shop. 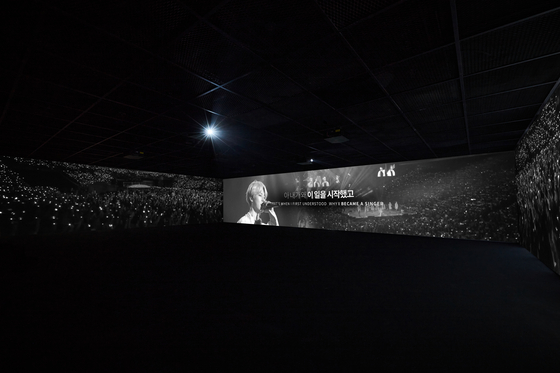 The exhibition ends with “Music is My Life,” a 10-minute video consisting of interviews from HYBE’s artists who each talk about their own stories of music. [HYBE]


“HYBE Insight is composed of a variety of exhibitions with HYBE’s music as its core theme to enable visitors to experience the power of music that HYBE and its artists believe in […] Visitors can use their full senses to experience the communication, inspiration and resonate through music as seen from HYBE’s perspective on the world, feeling first-hand the immense power and emotions that HYBE’s music brings,” said HYBE.

For the guided tour app, leaders of HYBE's K-pop bands such as RM of BTS and Yuju of GFriend have offered their voices and will walk the visitors through the museum experience. Visitors can choose which voice they prefer to hear.

All visit reservations must be made via Weverse Shop. HYBE Insight is closed every Monday from 11 a.m. to 9 p.m., with last entrances at 6:55 p.m., due to Covid-19. All visitors have a limited 2-hour stay inside the museum. Admissions cost 22,000 won ($20) for regular tickets and 25,000 won for photographed tickets that can be printed at the museum. One person is limited to buying one ticket per day, so for those who wish to visit with a friend, the friend must also download the Weverse app and make a reservation. For more information, visit www.hybeinsight.com or download the Weverse app.