Kim Ha-seong comes out on top in Korean MLB clash

Kim Ha-seong comes out on top in Korean MLB clash 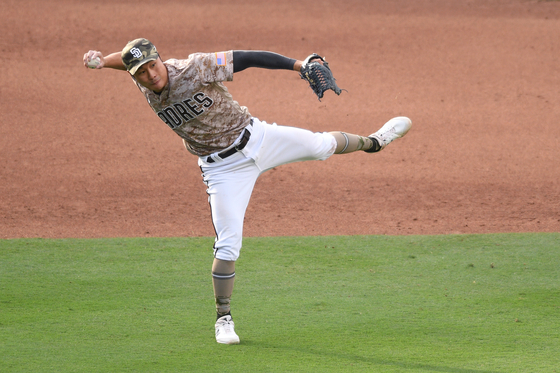 
Kim Kwang-hyun and Kim Ha-seong faced off on Sunday as the St. Louis Cardinals took on the San Diego Padres at Pepco Park in San Diego, a rare example of a Korean pitcher facing a Korean batter in the big leagues.


The Padres won the game 5-3 to sweep the series at home, following a big 13-3 victory on Saturday and 5-4 win on Friday.

Fireworks didn't exactly fly in the Kim vs. Kim faceoff, but it was Kim Ha-seong who came out on top, drawing an RBI walk in the fourth inning that ended Kim Kwang-hyun's game early. 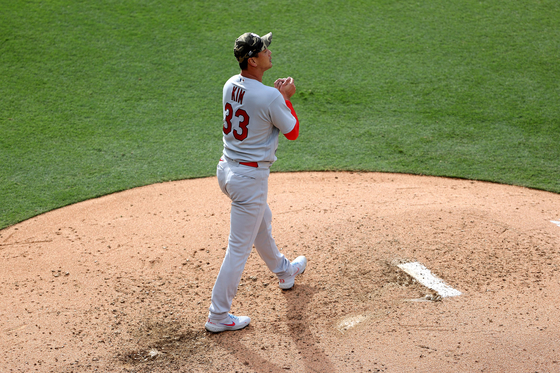 
The Cards' pitcher threw three and one thing innings, allowing four runs, one earned, off of two hits with three walks and three strikeouts. The shaky start saw Kim Kwang-hyun pick up the first loss of his major league career in his 14th game.

The starter looked strong in the first inning, with two groundouts and a flyout to retire the side in order. The second inning saw more of the same, with Kim Kwang-hyun using a lineout and two groundouts to finish the job.

Kim Kwang-hyun was throwing fire in the third inning, striking out two including Kim Ha-seong, before allowing his first hit of the game to Ryan Weathers before again shutting the door with another strikeout.

Everything went wrong in the fourth. A throwing error allowed Manny Machado to get on base, although a forceout off the next batter took Machado out. Kim Kwang-hyun then allowed a walk, a single and another walk to load the bases with one out.

Kim Ha-seong was up next, facing his old KBO rival for the second time in the game. The Padres' shortstop saw six pitches for a walk, bringing the runner home from third. Kim Kwang-hyun was taken off the mound, but the Cardinals allowed two more runs before they got out of the inning.

With Kim Kwang-hyun out the game, Kim Ha-seong recorded a strikeout in the sixth and another walk in the eighth to round out his game with no hits.

The two Kims faced each other 30 times in the KBO with Kim recording 10 hits including a double. They also played together on the Korean national team.

Korean vs. Korean matchups are unusual in the MLB, where the majority of Korean players tend to be pitchers. The last pitcher-batter clash was in 2019, when Ryu Hyun-jin, then of the Los Angeles Dodgers, faced Kang Jung-ho, then of the Pittsburgh Pirates.