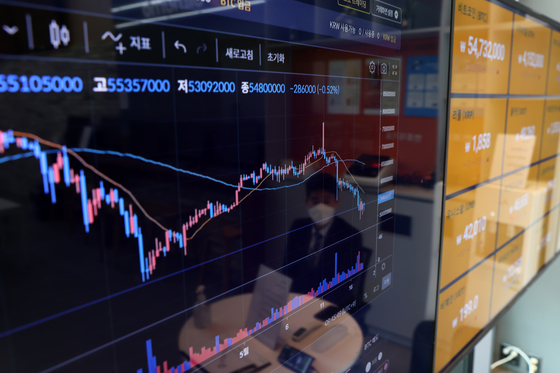 Bitcoin prices are displayed on a digital screen operated by the Bithumb cryptocurrency exchange, on Tuesday. [YONHAP]

Bithumb Korea, the operator of the Bithumb crypto exchange, posted a 222.6 billion won ($197.6 million) net profit in the first quarter, up 876 percent year on year, according to a disclosure by a major shareholder.

The exchange’s strong showing in the first quarter of 2021 came as Korean investors rushed into crypto investments as a rally in stocks paused.

This year, daily trading volume at local cryptocurrency exchanges broke the 20-trillion-won mark, greater than the trading volume of all Kospi-listed stocks.

As exchanges profit from trading, the frenetic activity has led to strong results.

The volume has also led to problems, as Bithumb has suspended and delayed trading a number of times in recent days. The exchange will be shutting temporarily on Friday for system upgrades and improvements.