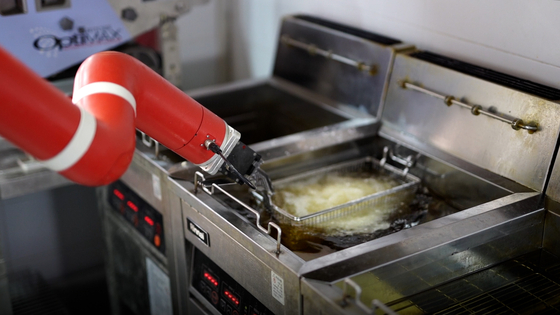 
When Kang Ji-young founded Robo Arete in 2018, her goal was a company that made cooking robots for food companies and franchises.

Working in venture capital, Kang had watched Korea’s food delivery business boom. She wanted a piece of that action, and the piece she envisioned was a chicken franchise in which robots were in charge of the kitchen.

But then reality intruded for Kang and her team. They came to realize that people aren't interested in whether their chicken is cooked by a robot or a human. When it comes to the business of food, all that matters is taste.

“Most of our customers don’t really know about our robot,” says Kang. “A few of them seem to be intrigued by it. But in general, they don’t care.

“But if there is one advantage we can offer as a franchise is that Robert Chicken will deliver chicken of identical taste and quality, regardless of the branch.”

Robert Chicken has two branches offering take-out and delivery in Gangnam, southern Seoul. Orders are mainly concentrated between 6 and 8 p.m. The stores generate revenues of around one to 1.5 million won ($1,330) each per day. In March, Robo Arete received one billion won in funding from Naver and venture capital firm We Ventures.

Robert Chicken’s goal is a franchise operated by a single person. A human staffer takes orders and package the food while the robot takes the heat in the kitchen frying the chicken.

“Popular restaurants stop taking orders from apps at peak time because they can’t handle the volume — that’s a pure revenue loss,” Kang said. “Our next step as a franchiser is to find a way to prevent that situation using software.”

Below are edited excerpts from Kang’s interview with the Korea JoongAng Daily on May 12. 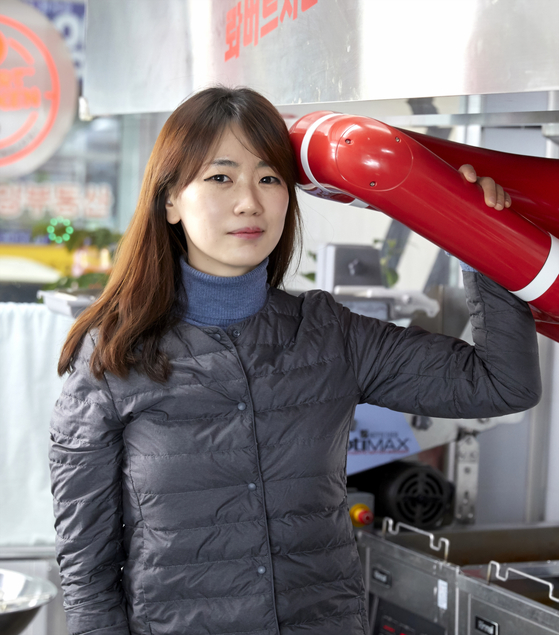 Q. In Korea, chicken franchises are a notoriously difficult business. It seems like an unusual choice for a former venture capitalist who wants to go into business.

In 2018, the concept seemed to make sense. Korea’s food delivery industry was around 5 trillion won in size. Capturing a small 1 percent of that market sounded like it would bring significant gains.

But business is so much more than just market projections. We had a difficult time, paying rent for our first store but having no robot to cook with for a year. Just before cash ran out, our team was selected for government funding in Sept. 2019. With that prize money, we purchased our first robot. Robert Chicken’s first branch opened its doors four months later.


Q. The robot arm in your kitchen looks like a robot device found in any factory. Where does the hardware come from?

The robot hardware is supplied by a local industrial robot manufacturer. Robo Arete is a software company that programs movements for the robot arm to be optimized for cooking. Comparing it to a smartphone, we’re an app developer. We make sure our robot produces the identical outcome and functions the same way without modification no matter where they are.


Q. Have there been any technology upgrades from your first prototype?

I don’t think there’s any point in doing a food business with robots if it can’t boost productivity. I don’t want our robots to boast flashy performances. I want them to be fast, precise in their job, with zero fluctuations in food quality. 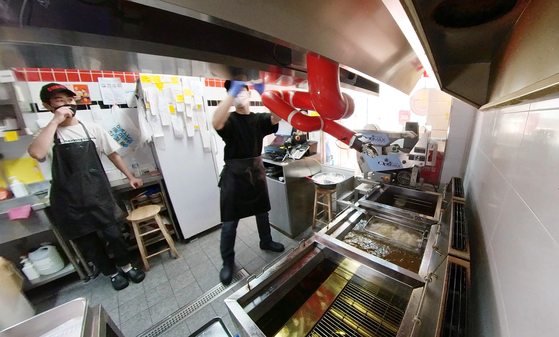 
Q. How many chickens can the robot fry and how does that compare to a human worker?

About 40 to 50 portions per hour. Frying about half that amount would be possible for a person but only through very intense labor. If you look behind the scenes at a chicken franchise, you have one person coating the chicken with batter and one in front of the fryer who's constantly flipping the chicken in oil to create a crisp surface. That all happens right next to heat of 170 degrees Celsius. It’s an extremely unhealthy job.

Another advantage of chicken-frying robots is consistency. What’s interesting about food is that quality can differ day by day according to the chef’s condition. That’s why you see customers say one branch tastes better than another, despite all of them being part of the same brand.


Q. Having a robot cook is good publicity but it’s the taste that makes customers order a specific brand.

We were lucky to realize that early on. In our early days, I went on a trip to the United States with my first engineer — on a route from Boston to San Francisco, searching for food automation companies.

There was one start-up, very famous but serving very bad food. That taught me a lesson. No matter how eye-opening the performance is, customers won’t come back if the food isn’t worth a second try.

The following month, we had our first tasting session — a disaster. Out of seven to eight menu items, only the fried chicken with no sauce received good comments. After that, we continued developing sauces and trying out new dishes with a sauce expert who was already working for one of Korea’s largest chicken franchises.

We managed to narrow down a long list of candidates to our current menu. The most popular dish at the moment is “peppery pepper” based on soy sauce.


Q. How would you introduce Robo Arete? Is it a robot company or a food company?

At this point, I can confidently call ourselves a food company. The robot is just a tool to excel in that field.

It’s ironic because I started thinking of doing a robot company. But my current priority at the moment is developing this food brand and making it better, not selling robots to other franchises.

I guess I got more attached to this brand “Robert Chicken,” as our team built it up from scratch. I’m increasingly feeling the need to invest in food and expanding our menu. There was a point in the past I thought we had enough, but no. A long menu is a must for a chicken franchise.


Q. How do you envision Robo Arete’s future?

Regarding the food business, we’ll definitely offer options other than chicken. Personally, I’d love to launch a Robert Tteokbokki [stir fried rice cake] one day. In a more distant future, I think there will be a point where cooking robots will be in home kitchens. And when that day comes, I hope to see Robo Arete competing between big names like Samsung and LG.


Q. It sounds unusual for a food franchiser to envision a future in home cooking appliances. They serve completely different markets.

We eat three meals a day. Who knows, maybe Robo Arete could dominate them all.

SK Telecom to hold free concerts in the ifland metaverse