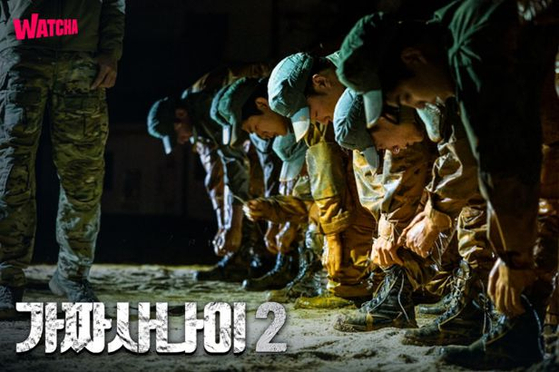 "Toy Soldiers" was the beginning of the fame of military-themed content that is populating broadcasters and YouTube nowadays. [WATCHA]


After “Toy Soldiers" was a viral hit last July, the hottest colors on Korean television are khaki and olive drab.

"Toy Soldiers" was a collaboration between the YouTube production company Physical Gallery and global security company Musat. The series took broadcast jockeys (BJ) and rappers and promised to turn them into "real soldiers." It became a social sensation, clocked up over 160 million views and spawned a series of popular memes. Many viewers were hooked on the intensive training endured by the participants in an extreme environment.

After its success, a female version of “Toy Soldiers” called “I’m a Survivor,” was aired on cable channel tvN. CJ CGV theaters screened a full version of the original series, called “Toy Soldiers: Fake Men 2 The Complete,” earlier this year. Not only did the YouTube series jump to the theaters, the film was screened in 4DX theaters, the ultimate theatrical experience. With seats jolting and wind and rain effects, the audience  indirectly experienced the painful training the participants went through on screen. 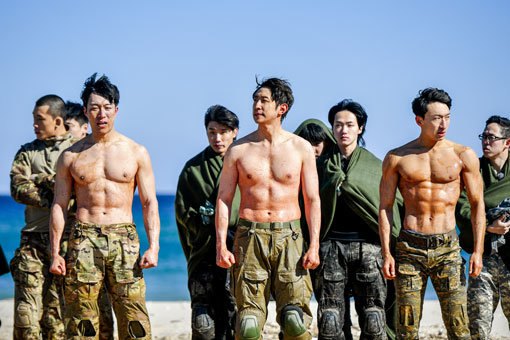 Scene from "The Iron Squad," where first reserve soldiers from special forces form teams to compete against each other on a given mission. [CHANNEL A]


“The Iron Squad,” a show on cable channel Channel A, is a military survival program. Reserve soldiers from the special forces form teams and compete against each other to see who is the toughest. In an episode on May 4, soldiers from  the Special Duty Team,  which is a tough hombre troop specializing in anti-terrorism, guarding important figures and arresting soldiers who go AWOL, refused to give up during a mountain march carrying 40-kilograms of gear — even though they had already been defeated. One member of the team was injured and his partner had to carry 80-kilograms of gear, and refused the help of other teams. Viewer Kim Young-ah, a 40-year-old working mom, said she learned a “lesson about doing one’s best, even when you’ve already lost," from "The Iron Squad.”

“Military life has always been a theme that can arouse the public's interest,” says culture critic Ha Jae-geun. “Through trial-and-error, producers have learned to keep out inappropriate humor and extreme violence, for which they were criticized, and steer their programs in the direction of honor, pride, and the spirit of never giving up. It has now become a storyline that can be enjoyed universally regardless of gender as it depicts the themes of comradeship, sacrifice and a fair fight.”

The importance of the military as an audience is also growing, as girl group Brave Girls demonstrates. It shot to the top of local music charts for the first time in 10 years as performance clips from military camps went viral. Soldiers were among their biggest fans. The group ranked No. 1 on SBS music ranking show “Inkigayo” and expressed its gratitude to “all soldiers on active duty."

Young Koreans doing compulsory military duty have finally become consumers of content thanks to a change last July in regulation over the use of smartphones within military camps. That's a new market of 600,000 soldiers.

Kim Sang-hyeon, 26, who finished his military duty last month, said that the servicemen “actively enjoy and consume cultural activities such as watching YouTube clips, leaving comments on the message boards of television programs and voting for their favorite singers on music programs after they’ve done with their training.”

“We don’t plan on hosting events just for the military, but we are noticing its impact on the market," one insider from a talent agency said.

Lotteria released a sandwich called the “Military Burger” last year, which resembled food served in the military.  Sports brand Fila released its own military look heavy on black, khaki and beige. Yeoncheon County in Gyeonggi has been hosting a “The World Military Look Festival” since 2016, where soldiers on duty and their families can participate together in various events, such as photo exhibitions of soldiers and various styles of military uniforms.  The fifth edition takes place on June 25. Yeoncheon County a frontline area — right on the demilitarized zone.

Celebrities finishing their mandatory military duty have also played a role. “Celebrities on military duty may have stirred up some controversies such as whether or not they’ve received favorable treatment within the camps,"  an anonymous insider from the military commented. "But highly popular ones such as Hyun Bin, Zo In-sung and Park Bo-gum set model examples of service and public interest in the military grew, with emphasis on the idea that military duty is an honorable act.”