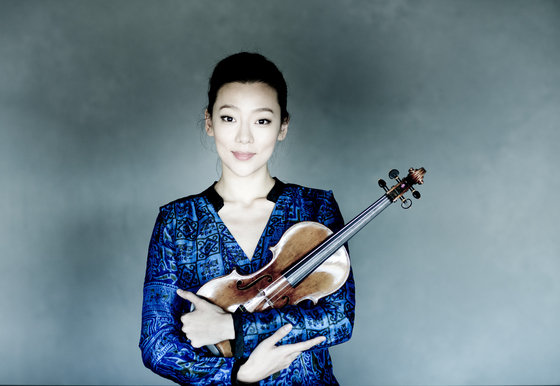 Some of the greats that have recorded this technically complex solo piece that lasts for approximately two hours include Jascha Heifetz, Nathan Milstein, Henryk Szeryng and Arthur Grumiaux, while young violinists motivate themselves to work hard with this goal in their minds.

Korean-German violinist Clara-Jumi Kang, 34, is taking a step closer to achieving the feat by presenting the complete cycle in one performance.

Beginning with a performance in Daejeon on May 25, Kang will hold a series of concerts presenting Bach's "Complete Sonatas and Partitas for Solo Violin" across Korea. After the Daejeon concert, she'll travel to Daegu on May 26 and then to Seoul on May 31. Her Seoul concert is set to take place at the Lotte Concert Hall at 7:30 p.m. while the final concert will be held on June 1 at the Gyeonggi Arts Center.

Kang says she wanted to take her time and perform the piece in front of an audience at “the right moment.”

She was one of the many classical musicians who were forced to return to their motherlands due to the coronavirus pandemic, but she says she took that as a sign that the moment is right.

The Korea JoongAng Daily interviewed Kang via e-mail prior to the kick off of her concert series. The following are edited excerpts.

Q. You have to perform solo for two hours straight and the piece is known to be physically and mentally demanding. How are you preparing for it?


A. For me, the challenge is trying to maintain the same concentration throughout the whole two hours and the only way to achieve that is through practice. I personally think that going over the complete cycle from the beginning to the end as if it’s a real performance is more beneficial than trying to focus on the specific movements.

Q. Why “The Complete Sonatas and Partitas for Solo Violin” at this moment of your career, and why now during the pandemic?


A. Playing Bach’s “Complete Sonatas and Partitas for Solo Violin” has been a dream of mine since I was in my early 20s. But in my 20s, I didn’t want to make rash judgments and just “give it a go” when I wasn’t actually ready. Now in my 30s, the thought of recording and performing the complete sonatas naturally came to my mind. I am so excited and happy to be able to pursue this project in my home country.

When the coronavirus pandemic began to close borders between countries around the world since last year, I began to really think about this project and set up a goal to strengthen my performance of Bach’s “Complete Sonatas and Partitas for Solo Violin.” Last August, I came to Korea for a duo concert tour with pianist Son Yeol-eum, and that’s when I thought I should not delay this project that keeps running through my head any longer.

The loneliness and disconnection we feel in this time of the pandemic is something that everyone is going through right now, so I was convinced that I would be able to empathize with people more deeply with this work of Bach. 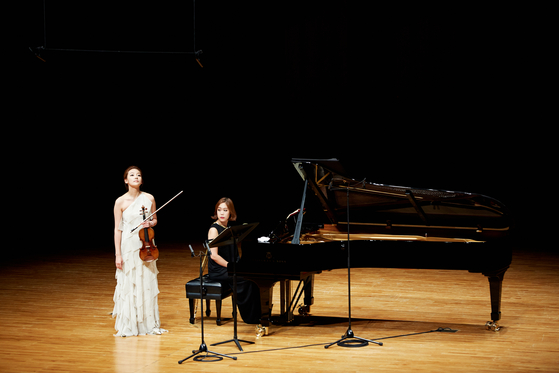 Kang and pianist Son Yeol-eum, who perform as a duo regularly, take to the stage together in 2016. Kang will attend the upcoming Great Mountains Festival in Pyeongchang, a classical music festival of which Son serves as the artistic director. [CREDIA, A&A]

Q. Is there a specific reason why you want to stage all six works in the complete sonatas in a single performance?


A. I wanted to stage the complete sonatas during the Marvao International Music Festival in Portugal in 2019 but because the venue was located on the basement level, I couldn’t play for too long for the safety of the audience members. So I had no choice but to perform it over three days.

There’s only one reason why I want to play this piece in a single performance. It’s because I want the audience members to listen to this set of six works as a whole piece. I want to convey the six works to the audience in one breath, if you know what I mean. I believe that by focusing on this one flow, both myself and the audience will gain a deeper understanding of the message that Bach tried to convey through the violin.

Q. Do you have plans to challenge yourself in performing the complete sonatas again in the future after the upcoming performance?


A. Yes of course. It’s a project I want to continue trying my hand at from time to time. In fact, it’s a piece that you can perform anywhere and anytime if you just have a violin in your hands. I want to perform it at different venues like in cathedrals, at churches, museums and in hospitals and orphanages. I also want to record the work at least once in my life.

Q. The power of music goes beyond language. For you, what is music?


A. For me, music is my life so it’s really difficult to explain in words what it means to me. To simplify my answer though, I would say music is a way for me to communicate my emotions with others.

In such a digitalized era, which focuses more on visual stimulation than auditory, there is a greater demand for stimulating content. But with the coronavirus pandemic, I believe many began to realize the greatness and the healing power of music and the arts. It was always the case if you look at history. When war broke out, people received comfort through art, music and literature.

Q. What makes Bach different from other composers like Beethoven, Brahms and Ravel?


A. I think Bach is a man who dedicated all his life to God, and the music that he created is like a god to us musicians. He brings life to every note and earth is felt in the music. We feel the wind, thunder and sunshine in his music. Without Bach, I don’t think such later composers would exist.

Q. What are your plans after the concert?


A. I will be participating in the Great Mountains Music Festival in Pyeongchang this summer. In September, I plan to tour the country with pianist Kim Sun-wook to perform Beethoven’s “Complete Sonatas for Violin and Piano.” Last year, to celebrate the 250th anniversary of Beethoven’s birth, we recorded the piece together and that album will drop in September. My concert schedule outside the country is still changing a lot because of the pandemic.