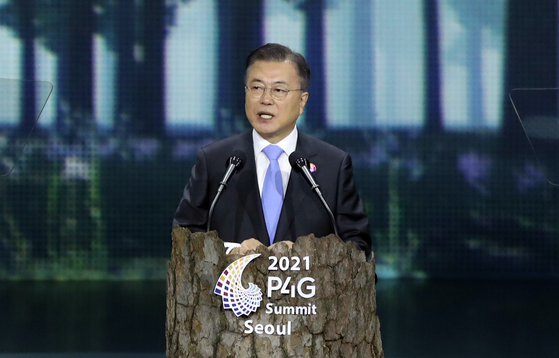 President Moon Jae-in speaks at the opening ceremony of the two-day 2021 P4G Seoul Summit which kicked off Sunday at the Dongdaemun Design Plaza (DDP) in Jung District, central Seoul, bringing together some 60 world leaders and heads of international organizations. [YONHAP]


President Moon Jae-in pledged Korea will work toward “inclusive green recovery” for carbon neutrality as he kicked off the two-day 2021 P4G Seoul Summit Sunday, bringing together some 60 world leaders and heads of international organizations to address the global climate crisis.

“The 2021 P4G Seoul Summit needs to become inclusive for the safety and sustainability of our future, and we also sincerely hope that it becomes an invaluable step forward toward achieving inclusive green recovery and carbon neutrality,” Moon said during the opening ceremony of the second P4G Summit, held in in-person and virtually, at the Dongdaemun Design Plaza (DDP) in Jung District, central Seoul.

P4G, or Partnering for Green Growth and the Global Goals 2030, is a global platform that seeks solutions for climate action through innovative public-private partnerships and aims to deliver on the UN Sustainable Development Goals (SDGs) and the Paris Agreement on climate change.

The opening ceremony was attended in person by some 50 people, including first lady Kim Jung-sook, government officials, diplomats to Seoul, representatives of international organizations and young people representing future generations, in compliance with Covid-19 prevention guidelines.

Moon in his speech announced ways that Korea can strengthen its pledges on climate change response to achieve an inclusive green recovery that involves developing countries, to overcome the unprecedented global climate and environmental crises.

The Korean government committed to significantly increasing its percentage of climate-related official development assistance (ODA) by 2025 and plans to help finance developing countries’ transitions to renewable energy, he said.

He said that the Korean government plans to strengthen support for creating and implementing green-growth policies tailored to developing countries by providing a new $4 million grant for the “sustainable management” of the P4G.

Moon expressed willingness to join three global initiatives aimed at raising biodiversity protection targets — the Leaders’ Pledge for Nature, the High Ambition Coalition for Nature and People and the Global Ocean Alliance — for the success of the 15th Conference of the Parties to the Convention on Biological Diversity, or COP15, in October in China. A key commitment of the three initiatives is to designate 30 percent of the Earth’s land and 30 percent of its oceans as protected zones by 2030.

Moon also announced Korea’s intention to host the 28th United Nations Climate Change Conference of the Parties (COP28) to work with the international community to ensure that children can dream of a future free from climate crisis.

He also highlighted efforts by Korea on reforestation, noting its peace forest initiative of 2019 to protect biological species including in the demilitarized zone at the inter-Korean border.

He said that the path to carbon neutrality by 2050 is also an opportunity for the growth of innovative technology and industries and job creation. In particular, Moon highlighted the potential of hydrogen energy.

“Going forward, we will act as the bridging country between developing and developed countries,” Moon said.

The P4G conference marks the first-ever multilateral summit on the environment hosted by the Korean government.

Korea last year declared its target to go carbon neutral by 2050, pushing its Green New Deal initiative aiming to accelerate the transition toward a low carbon and green economy.

The opening ceremony kicked off with a performance of the P4G theme song “We are one” by Korean singer Sohyang, who was joined by a children’s choir and accompanied by the marimba with a backdrop of an animated sequence of a greener future.

The ceremony, under the slogan of “Green We Go, Change We Make,” showcased Korean culture and digital technology through live animation sequences and performances by next-generation artists utilizing cutting-edge technologies.

Leaders and top government officials of 50 countries and heads of 20 international organizations, along with representatives from the business sector, civil society, academia and younger generations will take part in the summit which runs through Monday.

The theme of this year's summit is: "Inclusive Green Recovery towards Carbon Neutrality."

On the second day of the summit, five thematic sessions will cover: water, energy, food and agriculture, cities and the "circular economy."

A Leaders' Dialogue will be held Monday evening. The summit will adopt the Seoul Declaration as its outcome document.

Ahead of the summit, Korea established a presidential committee Saturday to oversee the nation's carbon neutrality drive.

The government-civilian panel, comprised of 18 government officials and 77 members from the private sector, aims to unify Korea’s efforts to achieve net-zero emissions by 2050.

Korea and Denmark agreed Sunday to elevate their ties to a "comprehensive green strategic partnership" as part of efforts to further deepen green cooperation on the climate and environment.

Both Korea and Denmark aim to go carbon neutral by 2050.

The inaugural P4G Summit was held in Denmark in October 2018.

There are 12 countries in the P4G: Bangladesh, Chile, Colombia, Denmark, Ethiopia, Indonesia, Kenya, Mexico, the Netherlands, South Africa, Vietnam and Korea. It partners with international organizations, including the Global Green Growth Institution and World Economic Forum, and over 240 global businesses and civic groups.