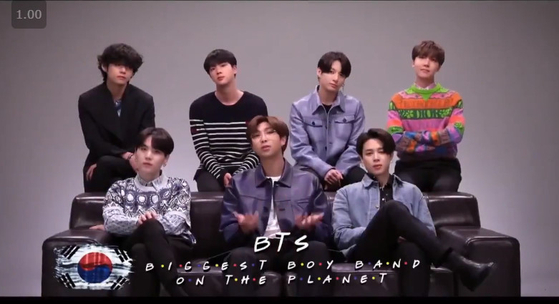 BTS appears in the ″Friends: The Reunion″ episode for about 13 seconds. [SCREEN CAPTURE]


Chinese streaming services cut scenes from “Friends: The Reunion,” which aired on May 27, including footage of BTS, Lady Gaga and Justin Bieber. All three have been the subject of controversy in China.

Variety reported May 27 that three Chinese streaming platforms cut around six minutes from the show, dropping scenes with artists that were “previously deemed to have ‘insulted’ China” and gay fan as well as segments they considered offensive.

Many Chinese fans of “Friends” have been expressing their bewilderment online after finding out that all three of the streaming platforms – iQiyi, Alibaba’s Youku and Tencent Video – had entirely cut the appearance by BTS.

BTS only appears for about 13 seconds in the show, in an interview style, saying how the series really taught them about life and true friendship.

LGBT groups around the globe are voicing displeasure at the cutting of remarks by a gay German fan of “Friends” named Ricardo, who appeared in the latest episode saying the show gave him a sense of belonging.

Face masks get a face-lift thanks to luxury fashion brands