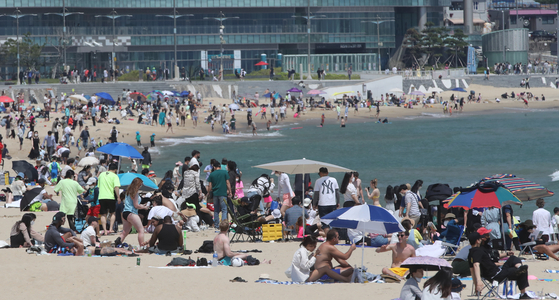 Tourists and locals cool off at Haeundae Beach in Busan on Sunday. As summer is coming, local governments announced plans to fully open beaches in July. Until then, some of the most popular beaches, like Haeundae Beach, will limit the number of people when they partially open this Tuesday. [SONG BONG-GEUN]


Korea will receive 1 million courses of Johnson & Johnson vaccine from the United States this week following Washington's pledge to provide Covid-19 vaccines for Korean troops, and will administer them to military-related personnel aged 30 and over.

The volume is nearly twice what U.S. President Joe Biden originally promised — which was courses to cover all 550,000 South Korean troops. It was the first time the U.S. administration promised vaccines for all members of a foreign army.

"We will send our military aircraft to bring in the vaccines in early June,” said Jeong Eun-kyeong, commissioner of the Korea Disease Control and Prevention Agency (KDCA), during a briefing on Sunday.

“They will be used to inoculate military-affiliated personnel, reservists and civil defense corps aged 30 and over,” Jeong said.

Johnson & Johnson’s Janssen vaccine, which only requires a single shot, became the third vaccine approved in Korea in April, following AstraZeneca and Pfizer, though it has not yet been administered.

The vaccine, however, will be restricted to people aged 30 or older like the AstraZeneca vaccine, which is also viral vector-based, following cases of rare blood clots in younger people.

The Covid-19 Vaccination Task Force said it will request emergency use approval for the vaccine so it can be used as soon as it arrives in the country. The Ministry of Food and Drug Safety will conduct its own quality test as it is the first delivery of Janssen vaccines to Korea.

Those who do not receive Janssen shots in June will be inoculated in the third quarter of the year as per the original plan.

"The Janssen vaccine is reported to be effective against South African and Brazil virus variants,” said Jeong, adding, “the vaccine has been given to about 10 million Americans, including members of the U.S. Forces Korea [USFK].”

The USFK began to administer the Janssen vaccine to its troops, including conscripts who comprise the Korean Augmentation to the U.S. Army (Katusa) and civilians who work on U.S. military bases.

Around 116,000 Korean soldiers aged 30 and over have received the AstraZeneca vaccine since April, and most have completed the first round of vaccination.

Soldiers under 30 years old, who are estimated to be around 410,000, will receive Pfizer shots in June as planned.

In addition, the first batch of 55,000 doses of the Moderna vaccine is set to arrive on Monday, the KDCA announced. This is part of a 40 million-dose contract signed with the company.

The first Monderna vaccines will be administered to medical workers under the age of 30.

Moderna’s vaccine, based on messenger RNA, was the fourth Covid-19 vaccine to be approved after AstraZeneca, Pfizer and Janssen. Korea approved the Moderna vaccine on May 21 on the condition that the company submit the final outcome of clinical studies.

According to the Covid-19 Vaccination Task Force, 163,457 people got their first shots Saturday.

The country hit a record number of vaccinations for a single day with 657,192 on Thursday, the first day vaccinations for people aged 65 to 74 began. Some 542,227 got shots on the second day, Friday.

The number of vaccinations decreased to 171,989 on Saturday, partly due to the closure or shorter operating hours of medical institutions on the weekend.

Korea's daily new coronavirus cases fell back into the 400s on Sunday for the first time in 20 days, although fewer tests are conducted over the weekend.

There were six additional virus deaths, raising the death toll to 1,957.