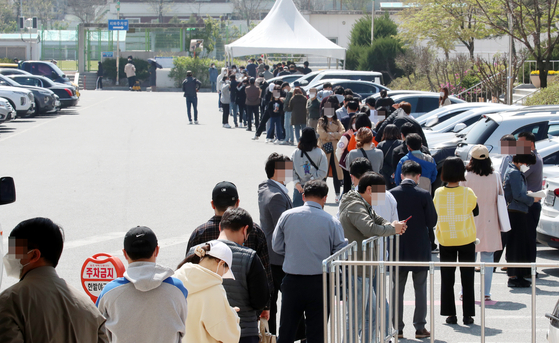 People line up to get tested for Covid-19 at Daejeon Hanbat Sports Complex on Wednesday as the city announced a hike in the social distancing level to Level 2 from Thursday. [NEWS 1]


The government is temporarily suspending AstraZeneca vaccines for people under 60 after a third blood clot developed in a patient after an AstraZeneca shot.

Korea's Covid-19 vaccination Task Force team said Wednesday that a medical worker in her 20s was diagnosed with blood clots in her legs and lungs twelve days after she got her first AstraZeneca jab on March 17.

She developed shortness of breath on March 29.

This was the third case of blood clot problems following AstraZeneca inoculations.

Previously, a blood clot was found during an autopsy of a patient in her 60s who died after inoculation. In the second case, a paramedic in his 20s was diagnosed with cerebral venous sinus thrombosis (CVST), or a brain blood clot, but he received treatment and recovered.

Amid growing concerns, authorities announced Wednesday evening that they are postponing inoculations of special education teachers and school nurses who were supposed to start getting AstraZeneca shots Thursday. In addition, vaccinations are temporarily suspended for people under the age of 60.

Meanwhile, Korea reported the highest coronavirus daily count in three months on Wednesday with 668 new cases, and the government decided to expand free Covid-19 testing sites to prevent a new wave of infections.

According to the Korea Disease Control and Prevention Agency (KDCA), Korea added 668 new Covid-19 cases as of Tuesday midnight, 190 more than the previous day. It was the highest daily count since Jan. 8's 674 cases.

With Covid-19 cases rising, health authorities warned that the country is on the verge of a fourth wave of Covid-19.

"We have to wait and see, but there is a growing possibility that a fourth wave [of Covid-19 infections] will begin in earnest," said Yoon Tae-ho, a senior official of the Health Ministry, during a regular briefing on Wednesday.

"Vigilance over social distancing measures have been eased a lot, and we need to be more vigilant as the fourth wave of the pandemic approaches," he added.

The daily average of local cases in the past week – from April 1 to 7 – was 523.7, already passing Korea's social distancing guidelines for level 2.5, which are for 400 to 500 cases daily nationwide.

Of the new cases, 653 were local transmissions and 15 imported, raising the country's Covid-19 caseload to 106,898. Four more deaths have been reported, bringing the death toll to 1,756 deaths.

The number of new cases outside the capital area has also been on the rise.

The central city of Daejeon added 61 new cases as serial infections continue from a cram school in Dong District, Daejeon.

As a result, Daejeon raised its social distancing measures to Level 2, the third-highest in the country's five-tier Covid-19 alert system, which will go into effect from April 8 to April 18.

To stop the spread nationwide, authorities said they will ramp up free Covid-19 testing.

"We will expand free Covid-19 testing so that anyone can get a free coronavirus diagnostic test regardless of the social distancing level or symptoms," Prime Minister Chung Sye-kyun said during a government meeting earlier on Wednesday.

Currently, Korea offers free testing when a test-taker has possibly contacted a confirmed patient, shows symptoms or when the social distancing level is above 2.

Those who desired to get tested without showing symptoms could get free tests only at temporary Covid-19 testing sites, which were criticized for being concentrated in the greater Seoul area.

Yoon added that the government is not yet considering mandatory testing of the entire nation.

"If we issue an administrative order that requires diagnostic tests for all citizens, the amount and duration of tests may increase significantly, so we aren't considering [such measures]," Yoon said.

Meanwhile, the Janssen vaccine, which only requires a single shot, became the third vaccine approved in Korea on Wednesday, following AstraZeneca and Pfizer.

The Ministry of Food and Drug Safety authorized the use of Johnson & Johnson's Janssen vaccine after three levels of analysis within the ministry's commissions and by outside experts.

The ministry authorized the use on the condition that Janssen submits a final results report of clinical trials.
Janssen showed around 66 percent efficacy among adults aged 18 and older, and must be stored at minus 25 to 15 degrees.

Korea has signed a deal with Johnson & Johnson to purchase Janssen vaccines to cover six million people, but it is unclear when the vaccines will be delivered.

Regarding the date of the delivery, Bae Kyung-taek, a health official from the Covid-19 vaccine task force said, "The government created a vaccine task force to advance the unconfirmed amount of [Janssen] delivery in the second quarter, and the Ministry of Health and Welfare and related ministries are working together." 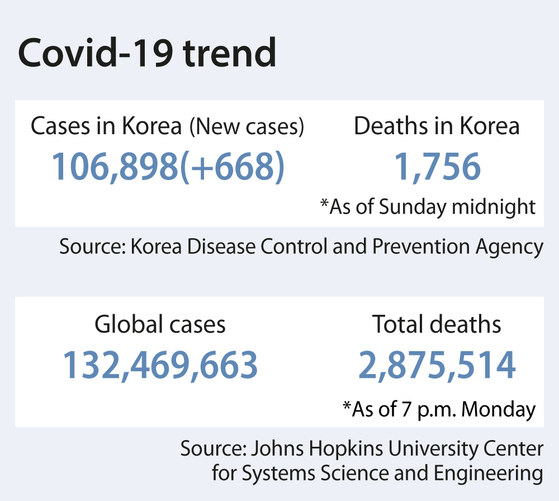 Since Korea began its vaccination campaign on Feb. 26, the country inoculated more than one million people as of Tuesday midnight with 1,039,066 – or 1.99 percent of the total population.

Korea was hoping to complete the vaccination of 12 million people by the middle of the year and achieve herd immunity by November.