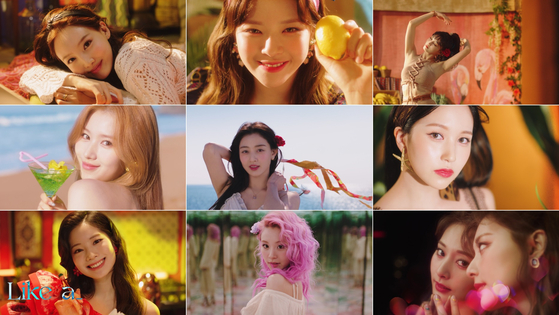 Twice's new album will drop on June 11, but "Alcohol-Free" and its music video will be unveiled at 1 p.m. on June 9.

"'Alcohol-Free' was composed and written by JYP Entertainment's leading producer Park Jin-young, who was helped by composer Lee Hae-sol with the arrangement," the agency said.

"Apart from 'Alcohol-Free,' the members took part in writing the lyrics of all the other the songs."

Some of the biggest names in the music industry were also involved with the album. Melanie Joy Fontana, Jade Thirlwall and Chloe Latimer took part in writing songs as well as Korean music producer Lee Hyun-do, otherwise known as D.O of hip-hop duo Deux.

The album will carry the "lively energy of a summer festival" according to the agency and aims to heat up this year's summer season, just as the group did with past summer tracks like "Dance The Night Away" in 2018 and "More & More" in 2020.

Twice is set to appear on "The Ellen DeGeneres Show” and perform "Alcohol-Free" for the first time on June 9.