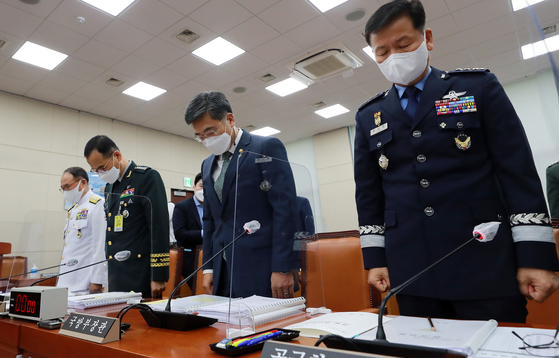 In this file photo at a National Assembly hearing on June 9, 2021, military leaders pray a silent prayer for an Air Force officer who committed suicide after reporting sexual harassment by her colleague. Defense Minister Suh Wook is second from right. [YONHAP]


A female Navy servicemember was found dead at her base on Thursday amid the military’s investigation into an allegation that she had been sexually harassed by a senior colleague, the Navy said.

According to the Navy, a 32-year-old chief petty officer was found dead in her barrack in Thursday afternoon. She was a victim of alleged sexual harassment by her colleague that she had reported to the military earlier this year.

Sources informed about the investigation said the victim had recently testified that she had been sexually harassed by a senior chief petty officer at a restaurant on May 27. She notified her supervisor immediately after the incident, but no formal report was filed.

She then informed the commander of her unit on Aug. 7 about the case, and a formal report was filed on Monday at her request.

She was originally stationed at a unit on an island but requested a transfer following the incident. The military assigned her to another unit on the mainland on Monday, sources said. She, however, was found dead in her newly assigned base just three days later.

The Blue House said Friday that President Moon Jae-in was furious after receiving the report about the officer's death and ordered a thorough probe.

The incident is the latest in a series of military sexual abuse cases and the military’s poor response to them, including possible cover-up attempts.

A female Air Force officer committed suicide in May, three months after being sexually harassed and reporting it to the military police. No action was taken against the perpetrator while the victim was still alive.

On June 9, Defense Minister Suh issued a public apology and vowed to improve the military’s reporting and response system of sexual crimes. His promise, however, did little to stop other incidents.

On July 25, the Air Force sergeant, who was identified as the alleged offender of the sexual crime, committed suicide in a detention cell while awaiting trial.

In another case, a brigadier general was arrested on July 2 for sexually harassing a woman in his unit. The incident took place on June 30, the last day of the Defense Ministry’s weeks-long special reporting period for sexual violence in the military that started from June 3.