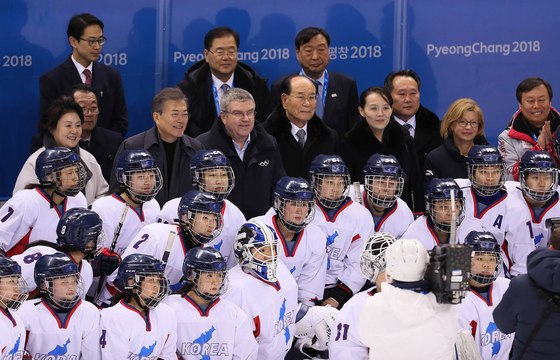 
North Korea is barred from participating in next year’s Winter Olympics in Beijing, the International Olympic Committee (IOC) announced Wednesday, after skipping the Tokyo Games this summer over fears of Covid-19.

The IOC’s executive board decided to suspend North Korea’s National Olympic Committee through the end of 2022 for ignoring its safety reassurances, including an offer to provide Covid-19 vaccines, and violating the Olympic Charter.

The North’s suspension puts a damper on the Moon Jae-in government’s hopes that the Beijing Winter Games, set to kick off next February, might serve as a venue to reengage Pyongyang.

"The Executive Board of the International Olympic Committee today decided to suspend the Olympic Committee of the Democratic People's Republic of Korea (PRK NOC) until the end of 2022, as a result of the NOC's unilateral decision not to participate in the Olympic Games Tokyo 2020," the IOC said in a statement on its website, referring to the North by its official name.

The North’s Olympic Committee will be ineligible for any financial or program assistance from the IOC for the next 15 months, the period of the suspension.

North Korea’s Olympic Committee will also have to forfeit money it was due from previous Olympics, which has been withheld because of international sanctions. This unspecified amount could potentially be millions of dollars.

The IOC said that the “accrued financial support from the IOC, that was due to be allocated to the [North’s Olympic Committee] but had been withheld due to international sanctions, will be definitively forfeited.”

Individual athletes from North Korea who qualify to compete in the Beijing Olympics could still be accepted if an “appropriate decision” is taken by the IOC in the future.

The IOC said that through “various communications and discussions” it held with the North Korean Olympic Committee over the months leading up to the Tokyo Games, it had “provided reassurances for the holding of safe Games and offered constructive proposals to find an appropriate and tailor-made solution until the very last minute (including the provision of vaccines).”

These offers, it said, were “systematically rejected” by the North.

It added that the North’s Olympic Committee “was given a fair opportunity to be heard, and received very clear warnings about the consequences of its position and the fact that any violation of the Olympic Charter” would expose it to such punishment.

For a long while, Seoul had hoped that the Tokyo Olympics could serve as an opportunity to resume dialogue with the North, as the PyeongChang Winter Olympics in 2018 began a short-lived détente on the Korean Peninsula and led to a series of inter-Korean and North-U.S. summits.

The two Koreas fielded their first combined women's ice hockey team at PyeongChang, and the two countries marched together under a Korean Peninsula flag at its opening and closing ceremonies. Pyongyang sent a high-level delegation including Kim Yo-jong, the North Korean leader's younger sister, to talk with South Korean officials on the sidelines of the Games.

However, on April 5, North Korea announced its decision not to take part in the Tokyo Olympics to “protect players from the world public health crisis caused by Covid-19,” following a meeting of its Olympic Committee on March 25.

At that time, the IOC said that it had not received an official notice of withdrawal from the North.

This was the first time North Korea skipped the Summer Games in 33 years.

The last Olympics boycotted by North Korea were the 1988 Games held in Seoul. It joined a Soviet-led boycott of the Los Angeles Games in 1984. But North Korea has participated in every other Summer Olympics since its first in 1972.

The Beijing Winter Games, just five months away, could have been a last shot at Olympic diplomacy for the Moon Jae-in government before the ends of its five-year term next May.

The IOC noted that the executive board “reserves the right to reconsider the duration of the suspension at its discretion,” indicating it could be extended.

Despite the disciplinary action taken against North Korea by the IOC, the Blue House said it will continue efforts at sports diplomacy with Pyongyang.

A key Blue House official told reporters in Seoul Thursday, "The government has nothing to comment on measures the IOC has taken against its member state, North Korea.”

The official added, “However, our government will continue to seek ways to advance inter-Korean sports exchanges and peace on the Korean Peninsula through various opportunities including the Beijing Olympics, as agreed upon by the leaders of the two Koreas.”

Chinese Foreign Minister Wang Yi will visit Seoul next Tuesday and Wednesday, and the Beijing Olympics and engaging North Korea was expected to be discussed with South Korean Foreign Minister Chung Eui-yong.

Earlier this year, South Korea submitted a joint bid to the IOC to co-host the 2032 Summer Olympics with North Korea, but Australia's Brisbane was named the host city in July.