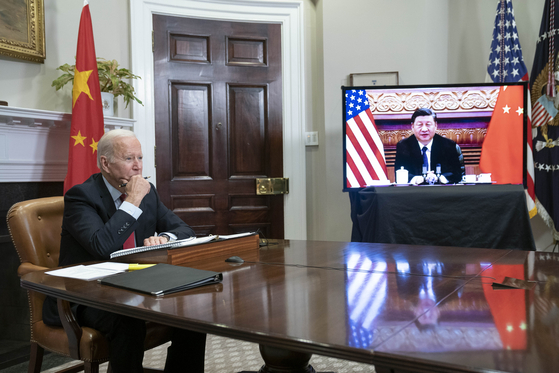 U.S. President Joe Biden listens during a virtual summit with Chinese President Xi Jinping in the Roosevelt Room of the White House in Washington Monday. [UPI/YONHAP]

U.S. President Joe Biden and Chinese President Xi Jinping held their first virtual summit Monday, talks closely monitored in Seoul, which finds itself caught in the middle of the growing rivalry between Washington and Beijing in trade and security matters.

The talks addressed the two countries' competition and points of disagreement on issues such as human rights. It also attempted to ease escalated tensions without making major breakthroughs.

On Taiwan, Biden underscored that the United States remains committed to the "one China" policy but strongly opposed "unilateral efforts to change the status quo or undermine peace and stability across the Taiwan Strait."

Xi in turn warned the United States not to “cross the red line” on the Taiwan issue, reported Chinese state-run Xinhua news agency.

"The Korean government is observing the U.S.-China summit situation with interest, holding the position of supporting a constructive dialogue between the United States and China," said Choi Young-sam, a spokesman for the Korean Ministry of Foreign Affairs, in a briefing in Seoul Tuesday.

When asked by a reporter to state Seoul's position on the Taiwan issue, Choi replied, "I would like to reiterate the policy that we will continue to make efforts as we have done in the past to promote exchanges and cooperation with Taiwan in substantive fields, including economic, under the position of respecting the one China principle."

China previously warned Seoul against "playing with fire" when the Taiwan issue was mentioned in a joint statement with the United States in May after a bilateral Korea-U.S. summit.

However, Seoul may find it ever harder to maintain a balancing act between its traditional security ally and its largest trading partner, according to some Sino-U.S. relations experts.

Orville Schell, director of the Center on U.S.-China Relations at the Asia Society in New York, said South Korea is a "chronic example of being stuck in the middle delicate situation with the Unites States and China."

Speaking in a webinar on "South Korea's Supply Chain Disruptions" hosted by the Asia Society Korea, the organization's Seoul branch, Schell pointed out that with Beijing and Washington taking diverging paths, "Countries like Korea which have traditionally wanted to stay in the middle find themselves stuck in the middle, and that ground where you can have an alliance with the United States and trade with China is shrinking daily."

Korea has recently faced a shortage of diesel exhaust fluid (DEF), needed by diesel cars and trucks to run, which analysts blame in part on the Sino-U.S. trade war and ensuing supply chain disruptions. Korea stopped producing urea, which is extracted from coal and used to make DEF, in 2011 and depends on supplies from China. But China recently suspended urea exports.

Schell said, "Korea has not only experienced the urea problem now, but during the Thaad missile crisis, you went through another version of punitive policy from China. Many other countries have too now, including Australia, Norway, Sweden and Canada." He was referring to China's backlash on Korean businesses in response to the deployment of the U.S.-led Terminal High Altitude Area Defense (Thaad) system in 2017.

The only way things can change significantly, Schell said, is "if allies, partners and friends come together in a way that China begins to worry that there may be a more concerted, collective collaborative response to these kinds of trade punishments and decides this is not in its interest in terms of its economic stability and growth rate."

He said the Biden-Xi summit could serve as an "inflection point" for China to "gain a more evolved notion of the importance of maintaining more congenial, collegial collective relations" with its neighbors.

It's important that countries like Korea "keep a position that can play to both sides," he warned. "If China continues to be punitive, if the oil and water begin to separate more and more between China and the rest of the liberal democratic world, then what's Korea going to do? What's the plan? It isn't as if America wants to push you into that, but the reality may simply be, that is your future."

He said that believing that "sticking to the middle ground will continue to be viable is very naïve."

"I think right now we are at a juncture," said Kim Joon-hyung, an international studies professor at Handong Global University and former chancellor of the Korea National Diplomatic Academy, in a forum at the Center for Strategic and International Studies think tank in Washington Monday, addressing a "strategic paranoia" in Korea in terms of U.S-China relations.

"I don't think it's strategic ambiguity," said Kim. "The fundamental basis is, of course, the [Republic of Korea]-U.S. alliance. But we don't want to critically damage the Korea-China relationship."

To critics who ask whether Korea's Plan A is the United States and Plan B China, Kim said the first priority is the Korea-U.S. alliance, and "our plan B is the U.S. and multilateralism."

However, he also pointed out that multilateralism nowadays is divided into blocs such as the Quad, Indo-Pacific Strategy, and Five Eyes, referring to security-related alliances amongst different regional groups led by the United States.

"We have a good working relationship, but joining as a member is another story," Kim said.