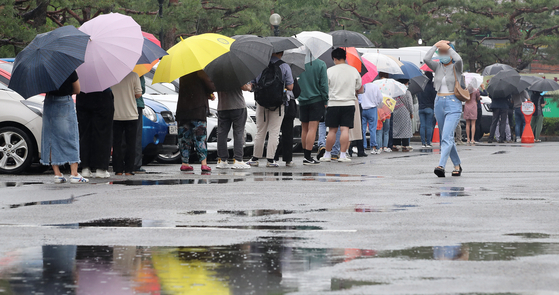 People in the southeastern city Daegu wait in line to get tested for Covid-19 on Thursday after 74 new cases were found — the highest since March 2020. As infections continue to grow, the municipal government announced Thursday it will raise the social distancing level to Level 2, the third highest in the country's five-tier Covid-19 alert system, which will take effect at midnight Friday and last until June 20. [NEWS1]


People over 59 years old will get first dibs on Covid-19 vaccines left over from canceled appointments starting Friday.

Until now, anyone wishing to get leftover shots could call or visit a medical institution and put their names on a waiting list. Currently, AstraZeneca is the only leftover shot available, and is being given to people aged 30 and above.

From Friday, only people aged 60 and over will be put on the waiting list, the Covid-19 Vaccination Task Force announced Thursday. If unused doses remain, they will be available online via mobile apps Naver and Kakao, a system that began on May 27.

The task force said older people weren't adept at making reservations online, so that system will now be used when the waiting list is empty.

Younger people who have already registered on the waiting list will be eligible through June 9, the task force added.

In addition, surplus shots freed up by low dead space (LDS) syringes — a syringe designed to reduce the dead space between the needle and the body — which were previously given to people who wanted leftover vaccines, will now be administered to senior citizens for their scheduled vaccinations.

People between 60 to 74 were advised to make normal reservations on the government’s website from May 6 to May 27, and inoculations for them will be conducted through June 19.

Health authorities are try to get senior citizens vaccinated by the end of June, as they are at a higher risk of death or serious illnesses from the coronavirus.

"The most important task among the vaccination goals of the first half of the year is to inoculate and protect senior citizens aged 60 or older, who have higher fatality and morbidity rates,” the Covid-19 Vaccination Task Force said in a statement.

"We ask for those under 60 on the waiting list to make concessions to give opportunities to senior citizens, who are the prioritized group for vaccination,” the task force added.

The government also plans to allocate most of the remaining 100,000 Janssen shots for the elderly population.

Korea began accepting reservations for 900,000 out of over one million Janssen doses sent by the United States for military-affiliated people aged 30 and over on Monday, which were all booked up in 18 hours. Health authorities put aside about 100,000 shots.

“We are considering giving priority on the inoculation list to senior citizens for the remaining Janssen doses,” said Hong Jung-ik, an official from the task force on Wednesday. “Specific details will be announced later, but our top priority is senior citizens aged 60 and older.”

Hong added that seniors won’t be able to choose between vaccine types.

A total of 331,190 people had received a leftover vaccine as of Wednesday midnight, the Korea Disease Control and Prevention Agency (KDCA) said.

Among them, 316,145 people got their shots after being put on the waiting list after calling or visiting a medical center, accounting for 95.4 percent of the total. The remaining 15,045 used the online reservation system.

Research from the KDCA showed that almost half of the people who booked leftover vaccines were in their 50s (43.5 percent). People in their 40s accounted for 39.4 percent, followed by people in their 30s (15.3 percent) and 60s (1.8 percent). 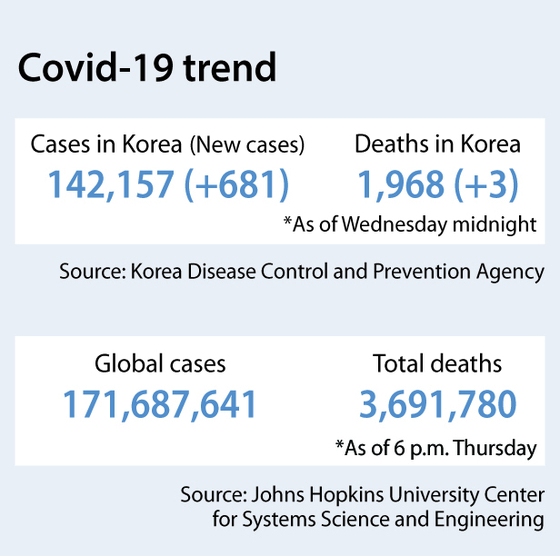 There were three additional virus deaths, raising the total to 1,968.