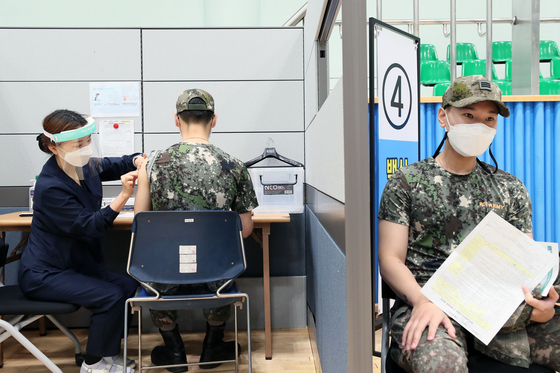 A soldier receives Pfizer's Covid-19 vaccine at a vaccination center at the Armed Forces Capital Hospital in Seongnam, Gyeonggi, on Monday. [YONHAP]


Korea kicked off Covid-19 vaccinations for people aged 60 to 64 and military troops under 30 on Monday, and recorded the highest number of newly vaccinated people for a single day with more than 837,000.

According to the Covid-19 Vaccination Task Force, 3,955,837 people are newly eligible to get the AstraZeneca jab, and 78.8 percent of those have made a reservation as of last Thursday.

Vaccinations for senior citizens first began on April 1 for those aged 75 or above, receiving Pfizer shots. From May 27, people aged 65 to 74 started getting AstraZeneca jabs at medical institutions.

Around 350,000 soldiers under the age of 30 also started their vaccinations with Pfizer shots at military medical institutions from Monday.

Soldiers aged 30 and over have been receiving the AstraZeneca vaccine since April, and most have completed their first round of vaccination. Those under 30 were excluded due to concerns over rare blood clots.

Inoculation with Johnson & Johnson’s Janssen vaccine will begin from Thursday for military reservists, civil defense corps and people related to the country's defense and foreign affairs aged 30 to 59.

Janssen doses for 1,012,800 people were sent by the United States, 88.1 percent of which have been booked. The rest will be allocated to people who need to go abroad due to essential official duties or economic activities, residents in island areas with no medical staff and some senior citizens.

On Monday, President Moon Jae-in reiterated the goal of getting at least one dose of a Covid-19 vaccine to at least 36 million people by the end of September, and reaching herd immunity earlier, while chairing a special interagency meeting on Covid-19 at the Blue House.


"With the added inoculation of Janssen doses for 1.01 million people, we expect more than 14 million people could get vaccinated in the first half of the year,” Moon said.

As of 6 p.m. Monday, 8.43 million people have received one dose of a Covid-19 vaccine — 16.4 percent of the total population and 60.2 percent of the target for the first half of the year.

"No one had expected that Korea would become a model for quarantine in the early days of the Covid-19 outbreak," Moon said. "Korea can become an exemplary nation in vaccination, too."

In particular, Moon stressed Korea will “certainly secure vaccine sovereignty,” and added the country will “speedily follow up on the global vaccine partnership with the United States.” 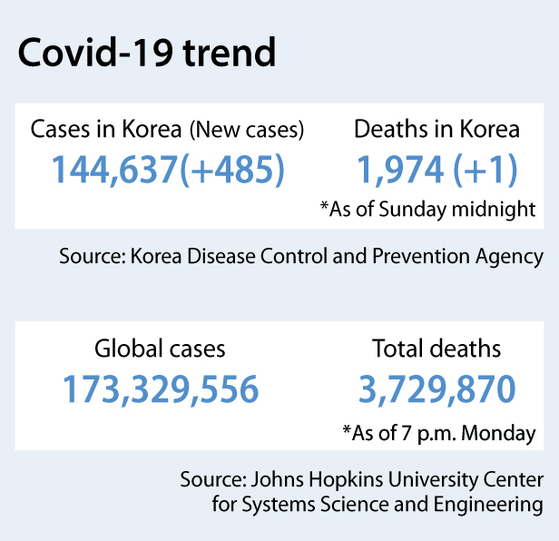 The country added one more virus death, raising the death toll to 1,974.

A growing cluster of infections, most of them foreigners, has been reported in Changnyeong County, South Gyeongsang.

Local officials urged all foreign workers and their employers, and people who visited the Central Asian cuisine restaurant Bulsok, to get tested for Covid-19.