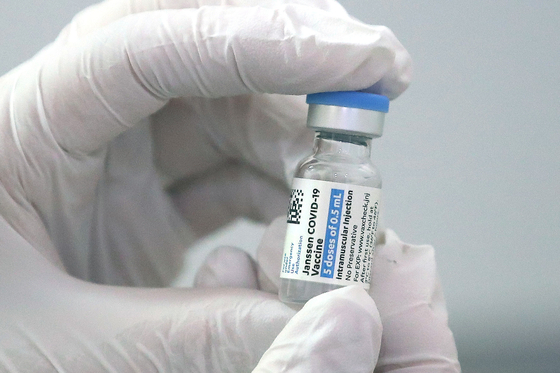 A medical staffer holds a vial of the Janssen Covid-19 vaccine. [NEWS1]


The first death in Korea after a Janssen Covid-19 vaccine was reported Sunday, while five people were accidentally administered five doses of the vaccine each last week, apparently without ill effect.

Inoculations started last Thursday and the man received the Janssen shot on that day at a medical facility in Suseong District in Daegu.

He had fever on the first day after the inoculation, which improved the following day, but his blood pressure continued to drop.

He was taken to an emergency room on Saturday afternoon and given fluids and painkillers as a preventive measure, but died at 3 a.m. on Sunday.

The man was reported to have been treated for a blood-related disease but was fully recovered, according to relatives.

Authorities will look into any correlation between his death and the vaccine.

As Korea's vaccination goes into a higher gear, vaccine mishaps are being reported from different parts of the country.

Five people in their 30s in Buan County, North Jeolla, were reported to have received five times the recommended dose of the Janssen vaccine and ended up in the hospital.

The accidents happened from Thursday to Friday at a medical clinic in which a nurse mistakenly injected each person with an entire vial of the Janssen vaccine, which contains five doses.

One developed a high fever of 40 degrees, while the others did not experience any serious side effects from the vaccine overdose.

Local authorities in North Jeolla canceled the clinic's contract for giving inoculations, saying it was responsible for accidents “that should have never happened.” They are continuing to monitor the five patients.

On the flip side, a hospital in Namdong District, Incheon, was found to have administered half doses of AstraZeneca vaccines to over 40 people.

The hospital injected half the recommended amount (0.5 mililiters) of the AstraZeneca vaccine, believing that "the adverse reaction will be less if only half the vaccine is injected."

According to the CDC’s recommendation for Covid-19 vaccine administration errors, if more than half a dose is administered, it advises not to repeat a dose. But if less than half a dose is administered or the proportion of the dose cannot be estimated, it advises the administration of the authorized dose immediately in the opposite arm.

The KDCA said local governments will consider penalties for the hospital that deviated from standard doses, and it will no longer be allowed to administer Covid-19 vaccines.

People who received their first dose at the hospital will be sent to another hospital for the second.

Meanwhile, a medical clinic in Jinju, South Gyeongsang, gave a person who showed up for the Janssen vaccine an AstraZeneca shot.

As cases of Covid-19 vaccine mishaps pile up, health authorities vowed to do better.

"We will identify the problems and come up with measures to prevent the recurrence of such cases," the Covid-19 Vaccination Task Force said, adding, “We will ask medical institutions for more precision to prevent errors during vaccination.”