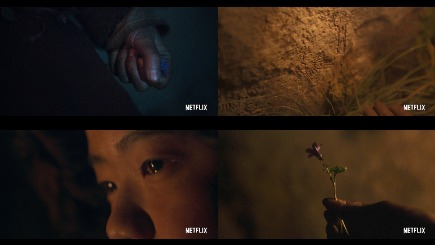 Still images from the upcoming "Kingdom: Ashin of the North" to hit Netflix on July 23 [NETFLIX]


A special episode of the popular Netflix zombie series "Kingdom" will be released on July 23, the streaming service announced on Friday.

The episode, "Kingdom: Ashin of the North," will travel back to the roots of the zombies that plague the Joseon Era (1392-1910) in the original "Kingdom" series, led by actor Jun Ji-hyun.


The story begins when Young Ashin finds mysterious carvings on a rock that read, "The plant to bring back the dead, it will come with a cost" and the plant of saengsacho, which can be translated to "life and death plant" in English.

The drama will be a prequel to the "Kingdom" series, directed by Kim Sung-hoon and written by Kim Eun-hee, who both took on the same roles for the first and second seasons of "Kingdom."

Actor Jun will play the role of grown-up of Ashin. She made a very brief appearance on the last episode of season two, when Prince Chang (actor Joo Ji-hoon) travels to China to find the origin of the plague.

From Haitian voodoo to ‘K-zombies’ (KOR)