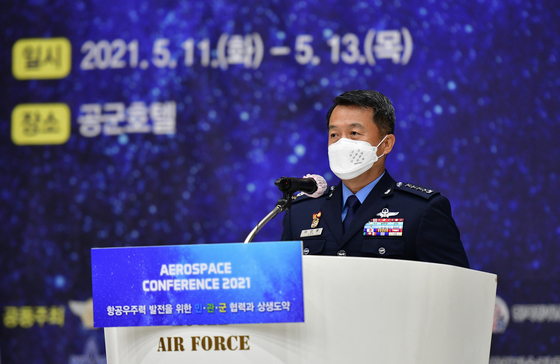 
The top leader of the Air Force said Friday that he will step down from his post over the recent suicide of a female officer who reportedly took her own life due to unresolved sexual harassment by a fellow service member.

General Lee Seong-yong, chief of staff of the Air Force, sent a text message to reporters in the afternoon, saying that he “accepts grave responsibility of the recent situation and has decided to step down as of Friday.”

President Moon Jae-in said Friday that he agrees that Lee will have to step down. The resignation will not be processed immediately in order for Lee to be probed as a member of the military.

Lee offered condolences to the deceased and her family. He also apologized to the people for troubling them with the incident.

The resignation of Lee, appointed as the Air Force chief of staff in September 2020, came only one day after Moon ordered a thorough investigation of the Air Force over its handling of the sexual harassment case.


According to the Defense Ministry, Lee received a briefing on the sexual assault complaint on April 14, 43 days after the alleged crime took place. The Air Force, however, sat on the case for more than a month. Lee briefed Defense Minister Seo Wook on May 25, after the victim committed suicide.

An Air Force sergeant stationed at a base in Seosan, South Chungcheong, took her own life on May 22. Although she filed a complaint to her unit that she had been sexually harassed by a male master sergeant after a work dinner in March, no proper investigation took place, her family said. The Air Force allegedly tried to cover up the case, urging her to reconcile with the offender.

The family uploaded a petition to the Blue House website on Monday, urging an official probe into her death and the sexual harassment which they believe led her to take her own life. The petition garnered over 217,000 signatures by Tuesday, passing the quota for a presidential response.

One day after Moon offered his condolences and ordered a thorough investigation, the military prosecutors on Friday raided the Air Force police that first handled the sergeant's sexual harassment report.

This is the first time that the prosecution of the National Defense Ministry conducted a raid since it launched the investigation Tuesday into how the Air Force unit handled the case and treated the victim.

The military prosecution detained the alleged offender, a master sergeant, on Wednesday on charges of sexual assault.