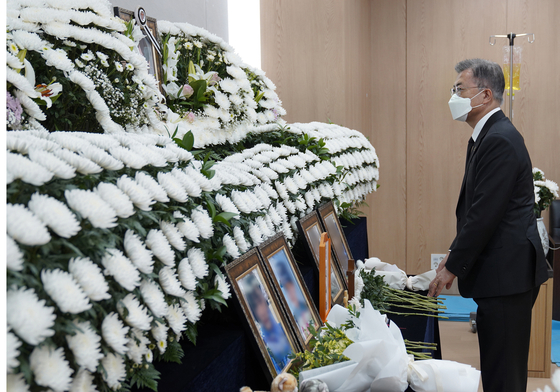 President Moon Jae-in pays tribute to the female Air Force officer who reportedly took her own life following a sexual harassment claim against a fellow service member, at the mourning altar for the officer in Seongnam, Gyeonggi, on Sunday.[YONHAP]

President Moon Jae-in vowed to rid the military of its “backward culture” in an address at the Memorial Day ceremony at Seoul National Cemetery on Sunday, in light of the recent death of an Air Force officer who reportedly took her own life following a sexual harassment claim against a fellow service member.

“Today we remember veterans, independence fighters and unknown soldiers who fought valiantly, as well as the heroic defenders of the nation during the battles and bombardment of Yeonpyeong and the Cheonan sinking,” Moon said. The ceremony was attended by veterans and their relatives, heads of political parties, the minister of patriots and veterans affairs and the chiefs of staffs of the Army and Navy, some attending virtually.

“But patriotism also involves protecting the rights of those who are currently dedicated to protecting this nation,” Moon said. “And for this I would like to convey my apology to the people regarding the recent cases concerning the poor quality of meals within the military and the backward culture in the barracks that led to an unfortunate death. We will set things right. I believe our military has the capacity to change and reform.”

An Air Force sergeant stationed at a base in Seosan, South Chungcheong, reportedly took her own life on May 22. Although she filed a complaint with her unit, saying she had been sexually harassed by a male master sergeant after a work dinner in March, no proper investigation took place, her family said. The Air Force allegedly tried to cover up the case, urging her to reconcile with the master sergeant. President Moon last week ordered a thorough investigation of the Air Force over its handling of the case.

Moon paid tribute to the officer at her mourning altar in Seongnam, Gyeonggi, following the Memorial Day commemoration on Sunday, and offered his condolences to the family.

Following the visit, Moon ordered Minister of Defense Suh Wook to “not only investigate the case thoroughly, but ensure a transformation of culture takes place,” according to the Blue House.

General Lee Seong-yong, chief of staff of the Air Force, tendered in his resignation on Friday. Moon agreed that Lee should step down, but the resignation will not be processed immediately so Lee can be investigated by the military.

According to the Defense Ministry, Lee received a briefing on the sexual harassment complaint on April 14, 43 days after the alleged crime took place. The Air Force sat on the case for more than a month. Lee briefed Defense Minister Suh on May 25, after the death.

The case came to the attention of the Blue House after the family uploaded a petition to the Blue House website on May 31. Within a day, the petition had received over 217,000 signatures, passing the level that compels a presidential response.

The master sergeant accused been detained since Wednesday. 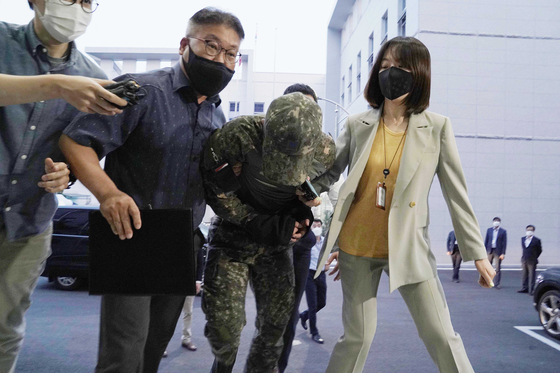 The Memorial Day commemoration on Sunday highlighted the sacrifices made by veterans of the Korean War (1950-53) from around the world.

President Moon, Minister Suh and U.S. Forces Korea Commander Gen. Robert Abrams visited a center at the Seoul National Cemetery dedicated to identifying the remains of soldiers of the Korean War, which was established at the cemetery in March.

“We have been able to identify the remains of eight soldiers in 2019, 19 soldiers in 2020 and eight this year,” said Heo Wook-gu, director of Ministry of National Defense Agency for KIA (Killed in Action) Recovery and Identification, also called the Makri.

“We are in the final stage of confirming the DNA tests with relatives of Canadian veterans, and if there is a match, this will be the first time that we have discovered and identified remains of Canadian veterans of the Korean War since we founded the recovery project,” Heo said.

Canada and Britain were amongst 16 nations who sent soldiers to fight during the Korean War. Of the nearly 2 million soldiers who fought in the war as part of the United Nations forces, around 37,000 made the ultimate sacrifice. The remains of around 3,950 are still missing, according to Korea’s Defense Ministry.

“The people of Korea shall never forget the sacrifices that have built this nation,” Moon said during the visit of the center, asking Makri and the center to “do all they can despite the pandemic” to recover the remains of the soldiers. 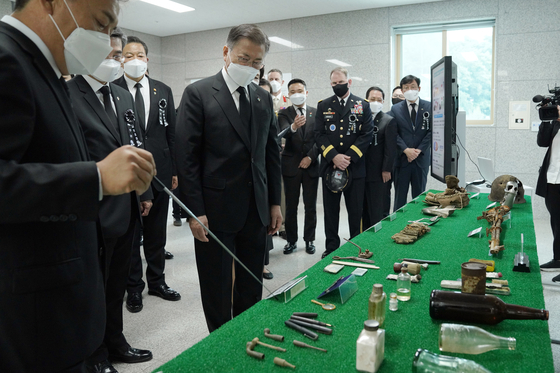 Heo Wook-gu. director of Ministry of National Defense Agency for KIA (Killed in Action) Recovery and Identification, far left, explains to President Moon about the objects found with the remains of veterans of the Korean War, at a center dedicated to the recovery of remains at the Seoul National Cemetery on Sunday. [YONHAP]