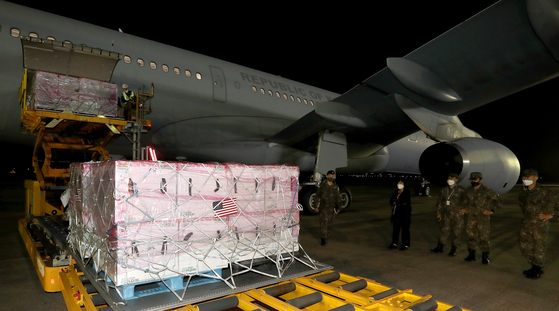 Johnson & Johnson's Janssen Covid-19 vaccines sent by the United States are unloaded from a military plane at Seoul Air Base in Seongnam, south of Seoul, on Saturday. The doses will be given to some 892,000 military reservists, civil defense corps members and people involved in defense and foreign affairs aged 30 to 60 from June 10 to 20. [YONHAP]


Teachers at daycare centers, kindergartens and elementary schools will receive Pfizer or Moderna shots in July so they are fully vaccinated ahead of the full-time return of pupils in the fall semester.

"By administering mRNA vaccines, which have a relatively shorter interval between the first and second shots, we plan to complete the two rounds of vaccinations during summer vacation to avoid any disruption in school opening at the end of August," said Jeong Eun-kyeong, commissioner of the Korea Disease Control and Prevention Agency (KDCA), during a briefing on Friday.

Around 380,000 daycare, kindergarten, and first- and second-grade elementary school teachers aged 30 or above were supposed to start getting AstraZeneca shots Monday.

But as the government plans for full-scale in-person attendance at schools from the second semester, those vaccinated with the AstraZeneca vaccine, which requires more than 11 weeks between doses, could have insufficient antibodies by the time of school reopening.

The second Pfizer and Moderna shots can be given three to four weeks after the first shot, so the teachers could receive both vaccinations and have sufficient immunity before the start of class.

"After discussing with the Education Ministry, we decided it would be more suitable to integrate the inoculations of teachers and administer the shots all together in July and August, rather than separating them," explained Jeong.

Daycare center, kindergarten, and first- and second-grade elementary school teachers under 30 who were excluded from the AstraZeneca inoculation due to the age limit will be eligible to make reservations for the Pfizer vaccination from Monday, and will be inoculated from June 15 as planned.

High school seniors and College Scholastic Ability Test (CSAT) test takers are set to be given Pfizer shots, but the vaccination schedule is still in the planning phase.

"We are discussing with the Education Ministry the inoculation of high school seniors during the summer vacation period after their final exams are over in July," said Jeong, adding that they are still discussing the schedule for CSAT takers.

The Education Ministry has been pushing for full school attendance in the second semester due to the learning, emotional, and psychological effects of the pandemic on students, and said vaccinations for faculty members was their primary goal.

Education Minister Yoo Eun-hye encouraged teachers to get vaccinated by receiving the AstraZeneca shot herself last Friday, along with school superintendents in cities and provinces.

Details will be disclosed through a road map to be announced by mid-June. 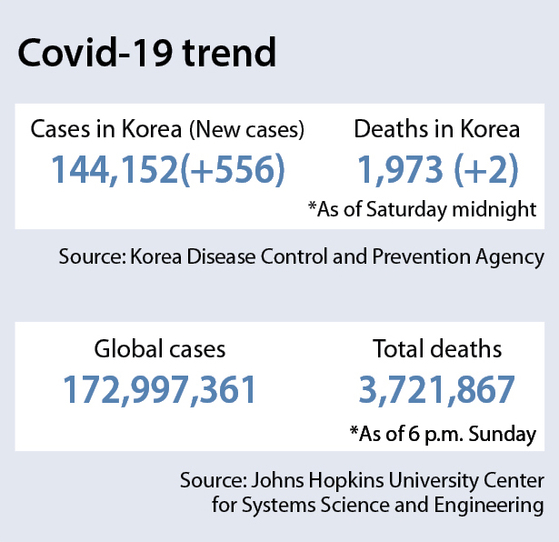 The country reported 556 new Covid-19 cases on Sunday, including 541 local infections, raising the total caseload to 144,152.

There were two additional virus deaths, raising the total death toll to 1,973.