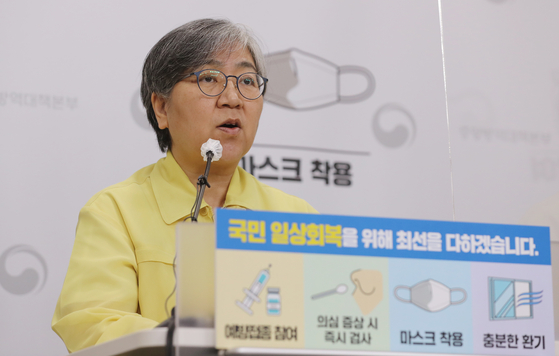 Jeong Eun-kyeong, commissioner of the Korea Disease Control and Prevention Agency, gives a briefing on a plan to inoculate people between the ages of 18 and 49 at the agency in Cheongju, North Chungcheong, on Friday. [YONHAP]


People between the ages of 18 and 49 will be eligible for Pfizer or Moderna vaccinations from Aug. 26 through Sep. 30.

As demand for vaccines skyrockets due to a surge in Covid-19 infections, a 10-day rotation system based on birth dates will be used for reservations.

The Korea Disease Control and Prevention Agency (KDCA) unveiled Friday the details of its vaccination plan for August and September, which mainly covers 17 million people between the ages of 18 and 49 years, or born between Jan. 1, 1972 and Dec. 31, 2003.

Vaccines based on mRNA — Pfizer or Moderna — will be offered to around two million people in that broad age group who need the jabs first, according to authorities, from Aug. 17.

The priority group includes employees of essential services such as public transportation drivers, delivery workers and street cleaners; people who work in close contact with children such as hagwon (cram school) teachers; employees of high-risk facilities such as restaurants, noraebang (singing rooms), PC bang (internet cafes); as well as people who may not have been well informed about the vaccination system, such as disabled people, foreign workers and international students.

Reservations for them will be available from Aug. 3 to 6.

After that group comes the general public aged 18 to 49.

For instance, on the first day of bookings, Aug. 9, people born on the 9th, 19th or 29th day of a month will be eligible to book a vaccine.

Reservations can be made each day from 8 p.m. until 6 p.m. the next day.

The government has special vaccine plans for certain groups of people including those with developmental disorders, heart and liver disease patients and rehabilitation facility users. They will be eligible for Pfizer or Moderna shots starting Aug. 26.

In order to prevent infections from spreading in commercial ships, vaccinations for international seafarers will be available: either the single-dose Janssen vaccine or mRNA-based vaccines. Seaman can book vaccines at their local health centers without having to make a reservation.

Korea will also administer Janssen or mRNA-based vaccine to homeless people and unregistered foreign residents. They can get vaccines by visiting their local health centers.

Amid the spread of the highly contagious Delta variant, the government will give another chance to people over 60 who haven’t been vaccinated yet.

Around 1.26 million unvaccinated people aged 60 to 74 will be eligible for AstraZeneca vaccines from Aug. 5 to Sep. 3.

Around 600,000 unvaccinated people over the age of 74 can get Pfizer vaccines by booking directly at a vaccination center at any time.

The government aims to inoculate a total of 36 million people, or 70 percent of Korea's population, by the end of September, and achieve herd immunity by the end of November.

In the fourth quarter, the country will open up vaccinations to anyone who wants one, the Covid-19 Vaccination Task Force said.

Although pregnant women and children and adolescents under 18 — or under 16 for Pfizer shots — are not yet eligible for vaccinations, the task force said they will plan to include them in the fourth quarter based on changes in domestic permits and overseas trends.

They will also review giving booster shots, or an extra dose of a vaccine after the initial series of injections, in the fourth quarter to the elderly and patients in nursing homes and hospitals, after discussions with medical experts.

According to health authorities, around 28.6 million vaccine doses, including 10.46 million batches of Moderna, will come in August and another 42 million doses will be delivered in September.

However, if another delay in vaccine delivery occurs like a Moderna delay this month, the plan could be slightly adjusted, authorities added.

There were four more virus deaths, raising the death toll to 2,089.

Starting Friday, all department stores and large discount supermarkets in areas under Level 3 or higher are required to register visitors with QR-codes or handwritten entry logs at their entrances.