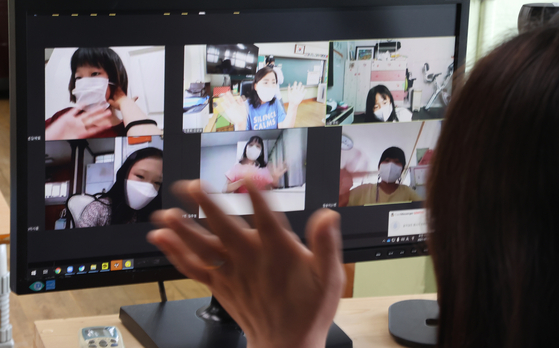 A teacher and her students attend a virtual summer vacation ceremony at Banghak Elementary School in northern Seoul on Tuesday, as all schools in the greater Seoul area switched to online classes due to record-breaking coronavirus infections. [YONHAP]

After a similar system overload last week, the government tried to take reservations on a staggered schedule by age and reinforced their server — but the system still crashed.

As soon as reservations became available, everything slowed to a crawl. People had to wait dozens of minutes just to access the website, and some never managed to succeed.

The Korea Disease Control and Prevention Agency (KDCA) shut down the system after about 40 minutes, saying it would increase the size of its cloud server.

Around 10 p.m., access to the website was restored, but many couldn’t make bookings because they were told they weren't the right age — even when they were.

Amid the chaos, hacks were shared online on DC Inside, Everytime and Naver cafe. One tip was to adjust a computer's system time or switch on and then switch off the airplane mode on a phone, which somehow cut the queue.

“I can finally go to sleep after staying awake for two hours from 3 a.m. to book a shot for my mom. Thank you so much," a user commented on one of the posts shared online.

Some pointed out that hacks posted online were only available to some, and the whole online vaccine reservation system was becoming another example of inequality in Korea, of haves and have-nots, even for the most basic of health services.

“It’s really frustrating to see that even bookings for vaccines are this competitive,” one user wrote. “What about the digitally disadvantaged groups? What is the government going to do?”

Another wrote, “I was able to book a vaccine thanks to my daughter, but I don’t know how I would’ve done it without her help.” 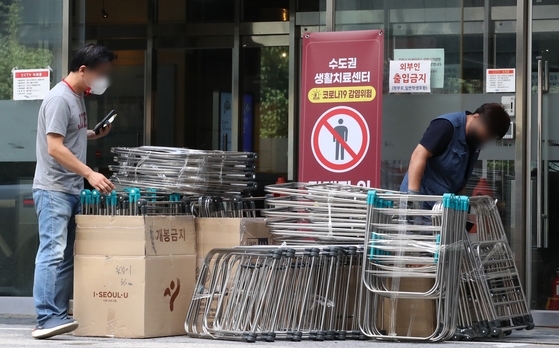 Officials unload furniture at University of Seoul in eastern Seoul on Tuesday, which will be used as a residential treatment center for Covid-19 patients with 520 hospital beds starting this day. [NEWS1]


People in their 50s also faced a switch in the vaccine type they will receive.

Health authorities had previously announced that all people in their 50s would be getting Moderna vaccines.

On Monday, however, they said that due to a "fluid situation" in vaccine supplies, the government had decided to use Pfizer supplies for most people in their 50s.

The country’s Covid-19 Vaccination Task Force said Tuesday that most people in their 50s in Seoul, Gyeonggi and Incheon will be receiving Pfizer vaccines when their inoculations start next Monday.

“A batch of Pfizer vaccine that will arrive on Wednesday will be assigned to the greater Seoul area, where it can be delivered within two days, so that all people who made a reservation can be inoculated [as scheduled] starting next Monday,” Lee Sang-won, an official at the Central Disaster and Safety Countermeasure Headquarters, said Tuesday.

However, 251 medical clinics in the Seoul metropolitan area are stocked only with Moderna shots, which will be given to their patients in their 50s.

"Although the combined supply of vaccines arriving in July and August remains unchanged, the [shipment] schedule for the third week of July was postponed to the last week of July due to quality or delivery problems,” Jeong Eun-kyeong, commissioner of the KDCA, said during a briefing on Monday.

The last day of vaccinations for people in their 50s was also extended by three days from August 25 to August 28 — which will affect the inoculation schedule for the next age group, people aged 18 to 49, who were told they would be given shots starting in August.

The delayed supplies of Moderna shots is also affecting the in-house vaccination programs at large companies.

Large companies were planning to vaccinate their workers in-house with the Moderna vaccine.

Whether they get Pfizer or Moderna vaccines will be determined in consultation with the Ministry of Employment and Labor.


Large Korean corporations such as Samsung Electronics and Hyundai Motor said Tuesday they will replace Moderna's vaccine with Pfizer's for their inoculation programs.

From 8 p.m. Wednesday to 6 p.m. Thursday, reservations can be made by anyone in their early 50s.

Meanwhile, a 51-year-old police officer died Tuesday, three days after getting a Pfizer for his second dose after having received an AstraZeneca shot for his first.

This is the first death reported after a mix-and-match vaccination.

According to the local Chilgok police station, the officer received an AstraZeneca shot on April 28, and then a Pfizer shot on July 17.

After the second shot, the officer reportedly suffered from headaches and chills. He didn’t have any prior health problems, according to colleagues and family members.

Health authorities will conduct an autopsy on Wednesday to investigate the exact cause of death. 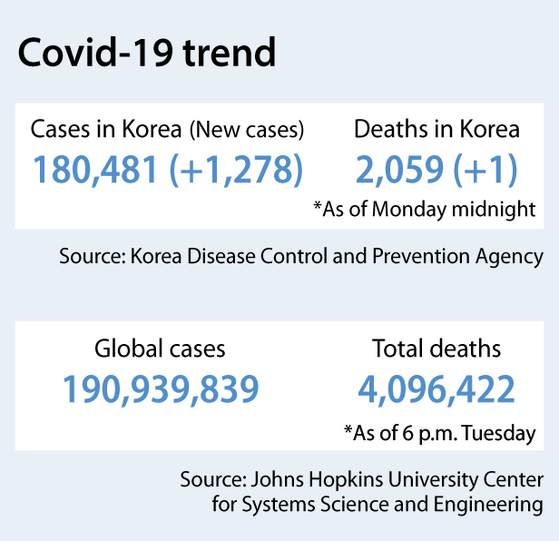 Korea reported 1,278 new Covid-19 cases on Tuesday, including 1,242 local infections, raising the total caseload to 180,481, according to the Korea Disease Control and Prevention Agency (KDCA).

The country added one more virus death, raising the death toll to 2,059.