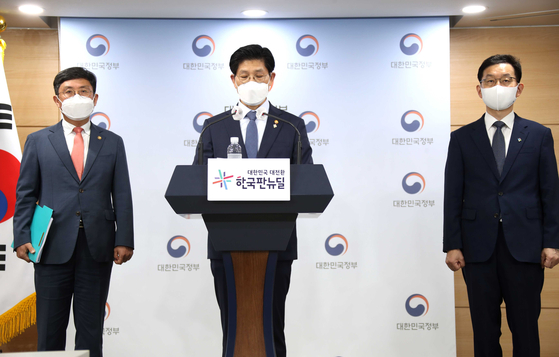 Noh Hyeong-ouk, land minister, announces the restructuring plan for Land and Housing Corp. (LH), including cutting 20 percent of its employees, at the government complex in Seoul on Monday. [YONHAP]


Land and Housing Corp.’s (LH) head count is to be cut 20 percent, and the number of senior employees prohibited from taking jobs at companies in related businesses will be increased to 529 from seven.

The state-owned developer will no longer conduct preliminary surveys on new town sites. That role will be taken over by the Ministry of Land, Transport and Infrastructure.

Land Minister Noh Hyeong-ouk on Monday said LH will be restructured to focus only on housing supply and housing welfare.

“Functions monopolizing, overlapping and unnecessary will be spun off,” Noh said.

The minister said the number of departments will be reduced to 38 from 50, with some moved to local governments or other public and private institutions.

“Departments that have nothing to do with the purpose of LH’s establishment will be abolished,” Noh said.

The government said other than projects with foreign governments, LH will no longer participate in new overseas projects. Its consulting department will be turned over to the Korea Overseas Infrastructure and Urban Development Corp. (KIND).

Details of the restructuring of departments is yet to be determined as public hearings and expert reviews must first be conducted.

The reorganization will inevitably lead to a shrinking of the organization, which employed 9,907 people as of the first quarter. The number of employees since the start of the Moon Jae-in administration increased 20.5 percent.
When including LH subsidiaries, the total number on the payroll is 11,380.


The salary of top ranking officials will be frozen for the next three years. Welfare and business expenses will be cut 10 to 15 percent.

Employees will also have to return bonuses received as LH’s management evaluation process will inevitably be changed and the bonus amount will be adjusted.

The move is targeted at preventing favoritism.

In the purchasing of properties to be rented to the public, LH will not be able to buy those owned by employees or their relatives.

As announced earlier, all LH employees will have to report assets.

The Land Ministry said if an LH employee purchases a property, whether it is land or a housing unit, they may face limits on their work and their promotion prospects may be curtailed if the asset acquired is not actually occupied by the employee.

Employees suspected of using insider information in buying properties will not only be fired but their cases will be turned over to the prosecutors.

The Land Minister said the government saw the controversy not as an exceptional misdeed by individual employees but as a structural problem.

“Since the merger in 2009, the organization has become oversized, power and information have been concentrated and the internal controls have been weak,” Noh said, referring to the combination of Housing Corp. and Land Corp. “As a result, the ethics and professionalism have weakened.”

Civic groups in March said 12 LH employees bought properties that were designated for new town development using insider information. Some of the employees were suspected of planting expensive trees on the land to increase the compensation that they would receive.

A three-month investigation was conducted, and the wrongdoings affected a by-election in April, where the Democratic Party lost both the Seoul and Busan mayor races.

Last week the Prime Minister’s office announced the preliminary results of the probe in which 2,800 people were investigated, while 529 were referred to the prosecutors.