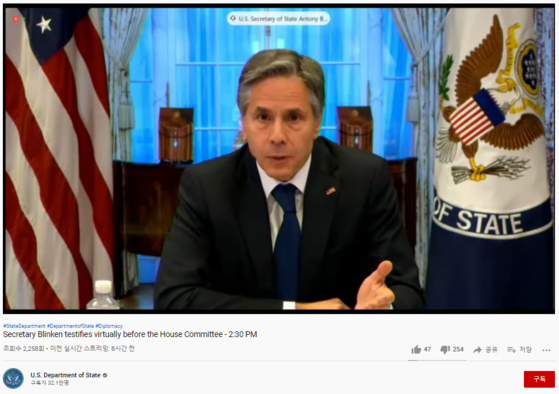 
U.S. Secretary of State Antony Blinken pledged Monday to work with both Seoul and Pyongyang to help arrange reunions of Korean-Americans who were separated from family members during the 1950-53 Korean War.

"This is just heart wrenching, knowing that people have been not only separated, but don't even know the fate of their loved ones," Blinken said in a hearing before a House Appropriations subcommittee on the reunion issue.

"What I can pledge to you is that we will absolutely work on this, including with our South Korean partners to make sure that the interests of Korean-Americans who have been separated from families are reflected in the efforts that we make and that are made."

Rep. Grace Meng, a Democrat from New York, asked about the desires of thousands of Korean-Americans to be reunited with relatives in North Korea, noting that "time is running out" as many are in their 80s and 90s.

"These Americans have lived without knowing whether their spouses, children or grandchildren are still alive," said Meng. "While there have been over 20 opportunities for divided families to have reunions [in Korea], none of them have actually included Korean-Americans."

Blinken said that he was "deeply sensitive" to the family reunion issue "because at the end of the day, so much of what we do, and we sometimes forget, comes down to real human beings, to real people."

However, he noted that much depends on North Korea's cooperation.

Blinken admitted, "It's very challenging and we don't know the kind of engagement that we're to get from the DPRK," referring to the acronym for the North's official name, the Democratic People's Republic of Korea.

On the appointment of a new U.S. special envoy for North Korean human rights, Blinken said, "We're moving forward on that."

A bipartisan group of lawmakers led by Meng and Republican Rep. Young Kim of California have urged the Joe Biden administration to appoint a special envoy for North Korean human rights, a post left empty since 2017. The post was last held by Robert King from 2009 to January 2017.

A letter sent to Biden in March by the bipartisan congressmen read, "Family separation remains a real and present trauma for many Koreans and Korean Americans and progress towards resolving this issue is essential to building trust and strengthening the resolve of both parties to work together in good faith towards a peaceful reunification."

Meng introduced the Divided Families Reunification Act in the House of Representatives in February. The bill instructs the U.S. State Department to periodically report to Congress on its consultations with South Korea on potential opportunities to reunite Korean-Americans with family in North Korea, including through video reunions.

The last time family reunions were discussed in earnest between North Korea and the United States was in May 2011, when King as special human rights envoy visited Pyongyang and met with North Korean First Vice Foreign Minister Kim Kye-gwan, which led to some follow-up discussions. The issue fizzled out by the end of that year.

There have been 21 face-to-face inter-Korean family reunions arranged since 2000, usually during times of thawed inter-Korean relations.

Some 120 Koreans residing in the United States have had an opportunity to participate in the 21 family reunions over the years, according to Seoul's Ministry of Unification.

"Our government is well aware of the urgency of resolving the separated family issue," a Unification Ministry told reporters in Seoul Tuesday. "It is necessary not only to hold inter-Korean reunions, but also for separated families in the United States to have an opportunity to reunite."

The official said, "The need for the reunion of separated families in the United States was raised at an inter-Korean Red Cross meeting in 2018, but an agreement was not reached because North Korea did not actively respond."

While reunions of separated families in the two Koreas usually take place after exchanging lists of potential participants, people with U.S. nationality are not eligible to apply. They can participate only if there is a request from a North Korean family.

The U.S. State Department banned Americans from traveling to North Korea since 2017.

The South Korean government has also built 13 video centers to hold video reunions of war-torn families, mostly in the Seoul metropolitan area, and even secured relevant sanctions exemptions to send equipment to the North.

But such video reunions have yet to take place as inter-Korean relations remain strained amid a standstill in North-U.S. denuclearization negotiations.

Since 1988, 133,406 South Koreans registered to be reunited with separated family members in the North, however, just over 48,000, or 36 percent, were alive as of May, according to Unification Ministry data.