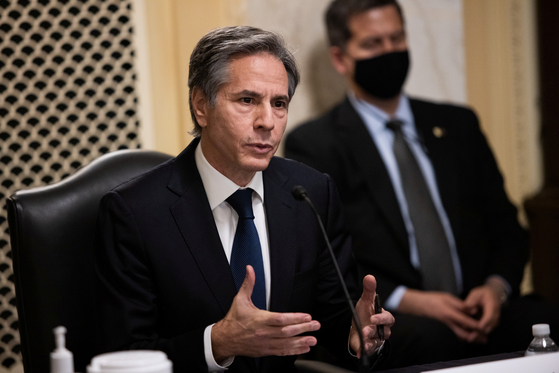 Antony J. Blinken speaks during his confirmation hearing to be Secretary of State before the U.S. Senate Foreign Relations Committee at the U.S. Capitol in Washington on Tuesday. [REUTERS/YONHAP]


President-elect Joe Biden’s nominee for secretary of state, Antony J. Blinken, said Tuesday a wholesale review of U.S. policy toward North Korea was in order, signaling the new administration's intent to dial up pressure on the regime over its nuclear weapons.

In a confirmation hearing in the Senate, Blinken gave a critical assessment of outgoing President Donald Trump’s personal diplomacy with the North — noting that the problem posed by Pyongyang “has not gotten better — in fact, it’s gotten worse.”

The Biden administration’s intention was to review “the entire approach and policy toward North Korea,” Blinken said.

Democratic Senator Ed Markey asked Blinken whether the Biden administration would support a “phased agreement” with North Korea, one that could involve tradeoffs of sanctions relief for verifiable progress on its denuclearization.

Blinken did not provide an explicit answer, noting instead an upcoming review of policy options toward Pyongayng would look into “what can be effective in terms of increasing pressure on North Korea to come to the negotiating table, as well as what other diplomatic initiatives may be possible.”

Such options, the nominee added, would involve “consulting closely with our allies and partners, particularly with South Korea and with Japan and others.”

Greater multilateralism in U.S. policy in East Asia is widely expected from Biden’s foreign policy team, which so far is being filled by Obama administration veterans like Blinken and deputy secretary of state nominee Wendy Sherman.

Before and after his election in November, Biden stressed the importance of shoring up ties with allies. In a phone conversation with South Korean President Moon Jae-in, Biden stressed his government would cooperate closely with Seoul on the North Korean issue.

Blinken’s reference to place more pressure on Pyongyang, however, seemed at odds with Moon’s own push to open up avenues of cooperation with the North in an effort to salvage inter-Korean ties before the end of his term next year.

Following the collapsed North Korea-U.S. summit in Hanoi, Vietnam, in February 2019, Seoul tried in vain to convince the Trump administration of the value of inter-Korean economic projects in getting Pyongyang to shed its suspicions. For Washington’s noncooperation, Seoul paid a price — North Korea cut off formal communications with the South and blew up their joint liaison office in June.

While unlikely to roll back economic sanctions, the Biden administration may be more accommodating of humanitarian overtures toward the North.

Blinken said Washington would be more open to offering humanitarian aid to North Korea, and would “do what we can to alleviate [the North Korean people’s] suffering.” The new administration will keep an “eye on the humanitarian side of the equation, not just on the security side,” the nominee added.

One concern for Seoul is that a newfound emphasis by the United States on humanitarian matters may bring scrutiny into its own recent attempts to curb private efforts to spread propaganda across the inter-Korean border into the North. The South Korean National Assembly’s passage of a law in December banning the distribution of leaflets and other material critical of the North in border areas drew intense criticism from international human rights groups.

Should the Biden administration turn the issue into a diplomatic sticking point, South Korea may again find itself in a dilemma that constrains its options with the North.

As for the bilateral denuclearization negotiations between Pyongyang and Washington, Biden officials have hinted that a settlement could be possible.

In a New York Times opinion piece from June 2018, before Trump’s first meeting with Kim, Blinken outlined his view that the best kind of deal Washington could expect from Pyongyang would be an “interim agreement” akin to the Obama administration’s 2015 nuclear deal with Iran.