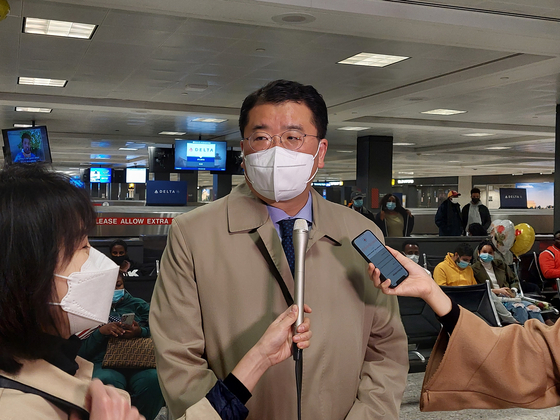 
Seoul and Washington are nearing some agreement on a proposal to formally end the 1950-53 Korean War, said South Korean First Vice Foreign Minister Choi Jong-kun Sunday ahead of a week-long trip to the United States.

Choi told reporters at Dulles International Airport outside Washington, D.C. Sunday that there is "no difference" between South Korea and the United States in regard to an end-of-war proposal," adding, "We are discussing when and how to do this."

He added, "It is the end of the year now, and I think there will be good results soon."

Seoul has pushed for a formal declaration to end the Korean War, which ended with an armistice agreement rather than a peace treaty, as a means of encouraging Pyongyang to return to dialogue.

The issue has been discussed in a series of back-to-back talks between South Korean and U.S. officials in recent weeks, signaling some progress since President Moon Jae-in reiterated his call for an end-of-war declaration in an address to the United Nations in September.

Choi is scheduled to hold a meeting with U.S. Deputy Secretary of State Wendy Sherman Tuesday and have trilateral talks with Sherman and Japanese Vice Foreign Minister Takeo Mori Wednesday.

He stressed the importance of South Korea and the United States "coming to an agreement on the methodology." He added, "I think there will be results soon, and then we will make a proposal to the North."

When asked if progress has been made in the coordination of a text of an end-of-war declaration, Choi replied that there will be a review of the talks between Seoul and Washington and that there will be further discussions at the upcoming meeting with Sherman.

"However, what is important is North Korea's response," he said.

Choi said he didn't know if the results of discussions about an end-of-war declaration will be made immediately public.

When asked if Pyongyang is likely to receive an end-of-war proposal positively under current circumstances, Choi replied it is "not easy to guarantee," noting what is important is for Seoul to do what it can.

On the matter of humanitarian support for North Korea, another means of encouraging Pyongyang back to the negotiating table, Choi stressed the importance of building communication and said, "We are in a situation where there is plenty of room for progress, and what's important now is a political decision."

In a press briefing on Oct. 26, U.S. National Security Adviser Jake Sullivan said South Korea and the United States may have "different perspectives" on the precise sequence, timing and conditions in regard to Seoul's proposed end-of-war declaration.

The two sides reportedly have been reviewing a text for such a declaration and the legal issues.

In a press conference last week, South Korean Ambassador to the United States Lee Soo-hyuck said that Seoul and Washington are "closely negotiating" the issue and "exchanging opinions on a text used in an end-of-war declaration."

The three-way meeting Wednesday is expected to discuss North Korea, global supply chain cooperation, climate change and Covid-19 responses, among other issues. It comes after the first virtual bilateral summit between U.S. President Joe Biden and Chinese President Xi Jinping Monday evening amid rising tensions between the two countries and could be an opportunity to brief Seoul and Tokyo on the outcome of those talks.